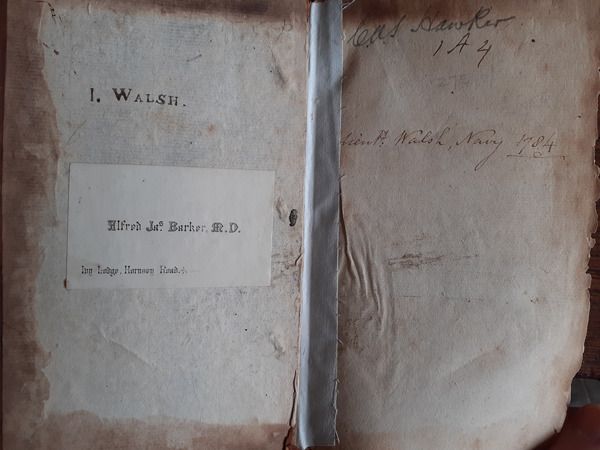 Every book changes over time. As a piece of writing its relevance, reputation and appeal will fluctuate, and history will leave its marks upon each copy as a physical object.

Most accumulate battle scars like tears, creases and coffee rings; a few gather marginalia, and many, at some point in their lives, are inscribed by their owners. More than anything, it is this accretion of inscriptions that can enable us to chart a volume’s voyage through time and space.

My recently acquired copy of Medicina Flagellata, or the Doctor Scarify’d (1721) is a case in point. A fascinating excoriation of early eighteenth century medical practice, this copy is remarkable because it is possible to identify three out of four named individuals who have owned it. 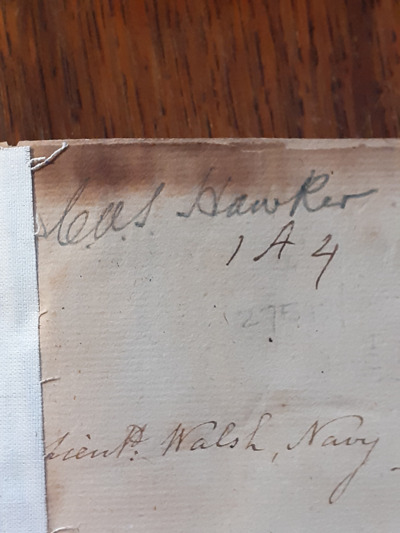 The earliest signature, dated 1784, is that of Lieutenant I. Walsh, of the Royal Navy. Reference to the Navy List suggests that this was probably John Walsh, who is listed in 1783 as being a Greenwich Pensioner, incapable of active service, perhaps through sickness or injury.

Dr Alfred Barker acquired the book during the second half of the following century and duly affixed his bookplate. Medical registers confirm that Barker passed his MRCS examination in 1852, became a Licentiate in Midwifery (LM) in 1855, and obtained his MD from St Andrew’s in 1858.

He went on to practise in Parramatta, Australia, but later established a surgery in the middle class enclave of Upper Holloway, London, also serving as surgeon to the Holloway and North Islington Dispensary, providing care to the poor not in receipt of parochial relief.

Finally comes the bold signature in pencil of C.A.S. Hawker, Australian soldier and statesman. Without a date to his signature, we can’t be certain when Hawker purchased the book, but perhaps when he was studying at Cambridge between 1919 and 1922.

Only one ownership mark defies examination: the stamp of E. Austin on the title page. The style of the stamp appears to indicate that Austin was an early owner, but the commonness of the name, and the lack of additional information makes further enquiry seem futile.

There is one last mystery that might never be solved: who wrote Medicina Flagellata? The library of the Wellcome Collection can shed no light and, at a distance of three centuries, we must accept that we will probably never know.

In the meantime, I will add the signature of an historian and bibliophile to those of a sailor, a physician, and a statesman – purely for the benefit, of course, of future owners.

Dr Stephen Haddelsey is a British author and historian specializing in Antarctic exploration. He is a Fellow of the Royal Geographical and Royal Historical societies, and an Honorary Research Fellow of the University of East Anglia.

Dr Haddelsey is the author of several books on the history of British and Commonwealth Antarctic exploration, including biographies of Frank Bickerton, mechanical engineer on the Australasian Antarctic Expedition of 1911-14 and Joseph Russell Stenhouse, who commanded the Aurora on the Imperial Trans-Antarctic Expedition of 1914-17. Dr Haddelsey is a distant relative of Frank Bickerton.

More recently, Dr Haddelsey has focused on "post-heroic" expeditions, including Operation Tabarin (1943-45) and the Commonwealth Trans-Antarctic Expedition of 1955-58 led by Sir Vivian Fuchs.

He has edited and introduced Andrew Taylor's Two Years Below the Horn: A Personal Memoir of Operation Tabarin (2017), Ivan Mackenzie Lamb’s The Secret South (2018) and Marvellous: The Trans-Antarctic Expedition Diary of Roy Homard, 1955-58 (2022). Most recently he has edited Jay Henry Mowbray’s classic account, Sinking of the Titanic, which will be published in 2023.