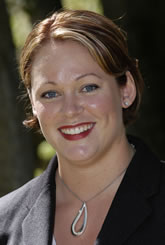 The following information was provided by Noni in February 2004

In 2000, I worked at ANU at the Research School of Information Sciences and Engineering as the Assistant to the Director, Professor Brian Anderson who was then the President of the Australian Academy of Science (1999).

After a year in this position I began work at Arthur Andersen. I was there for 6 months before taking a full time position at the ANU as Program Administrator for the Information Literacy Program upon finishing my university studies in July 2001.

Taking this position allowed me to pursue interests removed from legal work. It hindsight, it was the best thing I could have done. Although it used very little of my specialist knowledge, it made me very aware and thankful for the skills that a tertiary education provides.

Working in an area that was focussed on providing training and education to enhance graduate attributes made me realise the skills I had, and in particular the grasp of technology. Information literacy is such an important competency, particularly being able to access information through a variety of mechanisms including print, internet and electronic journals.

The opportunity to expand my skills and prepare course materials and conduct training was fantastic.  It certainly reinforced what I had suspected for a while.  There were so many different things I wanted to do in my life and the corporate/legal path I had been focussed on, may not be for me.

During my Law degree, I developed an interest in Alternative Dispute Resolution (ADR).

I was intrigued by the concept of mutually agreeable outcomes - especially after 5 years of law school being taught when dealing with cases, to get as much as possible while giving the least. In particular, diversionary conferencing for juvenile offenders and the concept of restorative justice seemed to make so much sense to me, and yet seemed so under-utilised. Mediation was something that was used to an extent in the legal and court spheres, and yet was often involuntary or court-ordered, which did not seem to make much sense.

I set about a two-year plan to work in an area dealing with ADR.  I was fortunate within six months to achieve my goal. I was the Manager Policy and Program Development for the Directorate of Alternative Dispute Resolution and Conflict Management in the Department of Defence from February 2002 until October 2003. I was responsible for writing and publishing the Defence policy on ADR including its use in workplace disputes and claims against the Commonwealth, procurement disputes. The program also has an environmental and peacekeeping focus.

I also conduct mediations on occasion, am a trained workplace conference facilitator and I have co-authored and published an article in the Australasian Dispute Resolution Journal titled 'Dealing with Conflict within the Military: An Evolving Model for Managing Conflict and Promotion Good Working Relationships among Defence Employees'.

In October 2003 I was promoted to an Executive Level position within Defence to become the Deputy Director Complaint Resolution at the Complaints Resolution Agency. This position is responsible for overseeing the investigation and staffing of APS Review of Action, Human Rights and Equal Opportunity Commission (HREOC), Defence Force Ombudsman (DFO), Commonwealth Ombudsman and Privacy complaints.

I enjoy the challenge that the role offers as well as the continued public service. I enjoy working in Defence and the challenges that working in a large public sector organisation (over 92, 000 people) brings. I believe strongly in the protective and defensive role that Defence fulfils and take great satisfaction in contributing to the safety of our nation. More specifically, the people focus of my position appeals to me as I am able to see the direct positive impact of the work I do.