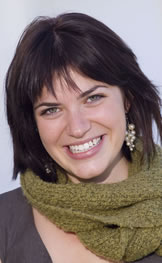 Ms Leah Ginnivan completed her secondary studies at the Catholic College Wodonga in 2005 and achieved an ENTER score of 98.95 with a perfect score of 50 in English. Her exemplary results reflect her excellent intellectual capacity, her meticulous work ethic and her passion for learning. She was awarded Dux of the College in 2005 and her ENTER score placed her close to the top 1% of students in Victoria.

Leah comes from a 5th generation farming family. She grew up between the two small towns of Yackandandah and Barnawartha in North-East Victoria. Leah attended a very small rural primary school - the Middle Indigo Primary School - with 15 students, one teacher with many of their lessons delivered via satellite.

Leah came to politics at a very young age, when the then Premier of Victoria amalgamated many shires and closed rural primary schools. Within her extended family, political debate was rife and she learnt to spar with her near-politically opposite grandfather.

In 2006 she moved to Melbourne from the bush to experience city life and gain independence, working at a backpacker hostel in the inner city.
While she enjoys her academic work, she is most proud of her community involvement and found it complemented her study.

Leah has sailed on the Australian Navy sail training ship Young Endeavour from Brisbane to Sydney, was the Melbourne Inner City Editor for Youthcentral, worked on the Victorian government’s whole-of-government youth website, volunteered with Oxfam and Vision Australia, is a regular Red Cross blood donor and is heavily involved in Amnesty International, attending the Amnesty Youth Summit in Canberra.

In 2003 she received the Fr Les Ring Scholarship, awarded to a student entering their final years of secondary education who shows leadership, academic achievement and involvement in both community and school.

Over the 2004-2005 summer holidays, she travelled to Denmark and Ireland on a Lions Club Youth Exchange. Leah has also travelled around Europe, South-East Asia, and New Zealand and within Australia.

In her view, there is a very real need for young people to both understand and be actively engaged with politics. Having grown up in rural Australia, she has witnessed the shortages of basic services and facilities due to political neglect.

In September 2005 Leah undertook work experience with Senator Lyn Allison. In March 2005 she was selected to attend the Girls-2-Govt program at Parliament house in Melbourne, a forum targeting young women’s involvement in politics.

Leah is a member of the Victorian Ambassador Committee for the Foundation for Young Australians, a youth-based organization which supports and promotes youth-led projects and projects that benefit youth. Leah believes that getting more young people involved in community activity is the best way to promote awareness of and interest in social and political issues.

Leah Ginnivan is an extraordinarily talented, responsible and enthusiastic young person with a driving social conscience who has the capacity to make a real difference.