Hawker Scholar: 2006 - 2008
Degree: Bachelor of Arts/Law
Institution: Australian National University & in residence at Burgmann College
Career goal: To pursue a career in politics, in the diplomatic service or for an international aid agency. 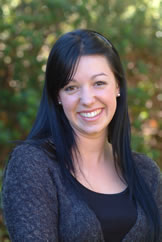 Lauren Hannan has always been interested in politics – local, national and international. While she has lived and studied in Melbourne, Indonesia and Sweden, she still calls the country town of Shepparton in Victoria 'home'.

Lauren successfully completed her secondary education at Notre Dame College in Shepparton in 2005. Lauren was Crane House Captain, SRC representative, the recipient of numerous academic awards, a participant in the College athletic and swimming teams and is an accomplished debater. Lauren is a positive person and strong team player.

Lauren believes in the creed that we should 'think globally and act locally' and that politics provides an opportunity to change the framework of the world in which we live. She is driven by a desire to use politics as a catalyst to make the community, be it local or global, a better place.

Lauren's overseas experiences in Indonesia and Sweden have given her a greater understanding of global issues related to poverty, education, human rights, health and access to basic amenities.

This awareness of global injustices resulted in Lauren becoming a member and the Group Secretary of the Youth St. Vincent De Paul Society. The group volunteers at the local Op-Shop in Shepparton and a result, she became more aware of the inequalities in her local community.

The group also raised funds for prosthetics for Moira Kelly's Children First Foundation in support of humanitarian work. Lauren was also involved in establishing the Seeds of Justice Group at Notre Dame College, a social justice organization concerned with local and global issues.

A sister school in East Timor provided an opportunity for the group to raise money for materials and textbooks for the East Timor school. The group also established a 'buddy' system with a local primary school with children in the English as a Second Language programme.

In 2003, Lauren studied in Sweden as part of a Rotary Youth Exchange at the Komvux adult education centre. The experiences in Sweden and Indonesia changed her life and made her aware of issues in fairness and equity which are now the focus of her life and reinforced her desire to become actively involved in global politics.

Lauren's commitment to and interest in social issues and the global community - and her determination to excel in the areas of personal integrity and moral leadership would have been applauded by Charles Allan Seymour Hawker.