Hawker Scholar: 1995 - 1998
Degree: Graduate of a Bachelor of Arts majoring in politics and a Bachelor of Laws
Institution: University of Adelaide
Residence: St Mark's College from 1995 - 1997 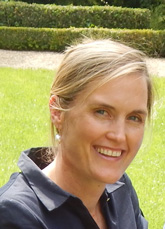 I commenced at St Mark’s College (Adelaide) in 1995. I could not have imagined at the time the fantastic people that I would meet and opportunities that would open to me from the Hawker scholarship. Robin Ashwin, the Former Master of St Mark’s, was one such influence. He encouraged me to join the Department of Foreign Affairs (DFAT) as a graduate trainee in 1999. I continue to work with DFAT, where I have had an interesting and diverse career.

My first overseas experience was in 2000 as a peace monitor on the island of Bougainville (PNG). I was deployed alongside the (unarmed) Australian army to help foster peace following a prolonged civil war. I will never forget the feeling of flying to my team site (Tonu) in a military helicopter, my feet dangling out of the open door as it came into land. The raw beauty of Bougainville was breathtaking. The dynamics of post-conflict reconstruction were fascinating. But my heart is still beating fast from an emergency helicopter evacuation after my patrol was chased by an angry armed local!

In 2002 I set off on my first full diplomatic posting as the Third Secretary responsible for Australia’s relationship with a number of UN agencies in Vienna. We also covered Slovenia, Slovakia and Bosnia. I would wake up each morning thinking that I had the best job in the world’s most breathtaking city. Many years later, I still believe that.

My third overseas experience commencing in 2007 was in East Timor. I learned to live under curfew. My work enabled me to explore the country’s intriguing politics. On my weekends I explored the wild countryside on a bike and with a tent. When my posting came to an end in 2009, I did not want to leave, so I used my long service leave to work for the then Timorese Vice Prime Minister, Mario Carrascalao.

In Canberra, I have worked on Australia’s diplomatic relationship with a range of South East Asian countries, on corporate issues, and most recently on diplomatic and consular law. I have also had the privilege of learning four different languages prior to my postings: Tok Pisin, German, Tetum and French.

I am now (2016) working as the Political Counsellor at Australia’s Embassy in Paris. We also cover Morocco, Algeria, Monaco and Chad. The terrorist attacks have significantly impacted France since I have been here, but the city remains as beautiful as ever.

Without question, the Hawker Scholarship helped to launch me into an exciting and interesting career. For this, I am very grateful.