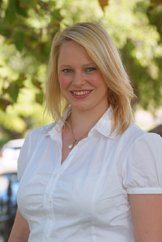 Alicia Hurkmans is the best of Australian youth, a young person who will help maintain Australia’s reputation as a progressive, accountable and resourceful nation. As Captain of Trinity College in South Australia in 2009, Alicia’s Principal Kym Reynold’s praise of her contribution and commitment was exceptional. Her TER of 98.55 reflected her efforts and ability. Alicia set new standards in organisation, responsibility and accountability in the College captain role.

Alicia is a gifted academic student and an outstanding swimmer. She took SACE Stage 2 over two years to fit with her state and national swimming commitments.

Her successes as a state and national swimmer resulted in her spending time with the AIS development team.

Alicia believes Australia’s future prosperity in the hands of its engineers and scientists. Australia must develop new energy efficient methods of conserving resources to support an expanding population. If Australia is to expand as a nation it must continue to develop cutting-edge technology. Alicia envisages that when she has completed her degree, she will develop technologies for use in agriculture, water treatment or energy production to support sustainable, energy efficient methods of manufacturing in Australia.

Alicia is a passionate, diligent and thoughtful scientist. She has attended numerous important science events including the 2008 National Youth Science Forum (NYSF) and the 2009 Youth Australian and New Zealand Advancement of Science (ANZAAS) Conference. These experiences fostered her enthusiasm for science and have encouraged her to initiate a chapter of the Young Scientists of Australia (YSA) in Adelaide. She attended the National YSA Conference in September 2009 and is currently founding President of the Adelaide Chapter. YSA is an association for promoting science to youth. Alicia’s goal is to develop the Chapter over the next few years to encourage and provide opportunities for members to follow their own interest in and passion for science.

Alicia is a natural leader who has grasped leadership opportunities on the sporting field and in the classroom whenever those opportunities arose. The role of College Captain involved the co-ordination of the Prefect Leadership team, organisation and management of College-wide events and activities, combined with an active service role throughout the Colleges’ five schools. She has planned large functions, mentored students and co-ordinated fundraisers including the 40-hour famine for World Vision, the Cancer Council’s Relay for Life and an Anglicare Food Drive.

The College Captain position provided Alicia with numerous opportunities to grow and develop as a communicator, negotiator, councilor, motivator, organiser and most importantly a leader. The role fuelled her interest in public service and she hopes to engage in further leadership and service positions wherever they arise in the future.

Throughout 2009 she participated in numerous public speaking roles, including master of ceremonies at the Trinity College Open Day, debating competitions and she reached the semi-finals of the Rostrum Voice of Youth Public Speaking competition. Alisha was also the College’s representative at the International Women’s Day Debate and the National Young Leaders Day in 2006 and 2007. These experiences inspired her to pursue further opportunities within politics, debating and public speaking.

Alicia has been involved in numerous sporting pursuits. She was a competitive swimmer for nine years. At a National Level her best results were 5th in an Age final and 12th in an Open Women’s final. Representative teams include the Pacific School Games in 2005 and 2008, SAPSSA from 2001 to 2004, the National Youth Squad in 2002, multiple State Squads from 2001 to 2009 and Captain of the Trinity Swimming Team for the past three years.

She has also participated in the School Girls Knockout Soccer team for two years and was awarded the most improved player in 2007. Alicia is currently a competitive pool lifeguard and has been selected in the State Team to represent South Australia in Canberra in 2010. Through her involvement in pool and surf rescue, she also volunteers at surf clubs during summer to create a safer swimming environment for the public on South Australian beaches. She is employed as a lifeguard and a swim schoolteacher at two aquatic centres, balancing this work with her academic pursuits, sporting commitments, leadership responsibilities and volunteer work.