Degree: Bachelor of Arts & Bachelor of Economics
Institution: Australian National University
In Residence: Burgmann College
Career Goal: To serve Australia in the world by pursuing a career in Australian politics, the United Nations, an NGO, foreign relations or diplomacy as well as academia. 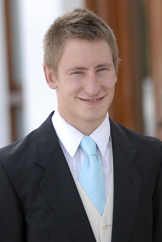 William Jenkins was born at Katoomba NSW and was educated at the Katoomba and Hornsby primary schools, Southern Hills Middle and Fairview High Schools in Colorado USA. He graduated from the Glenunga International High School (GIHS) International Baccalaureate High School Diploma in Adelaide in 2007 with a TER of 99.8. He completed his first year of Arts and Economic degrees at ANU in 2008.

William is a well-traveled, multi lingual, motivated, passionate and patriotic Australian. In addition to English he speaks, to various levels of competency, French, Arabic, Persian, Latin, Welsh and Hindi/Urdu.

He now lives his life based in part on an old Kurdish saying If water stands motionless in a pool it grows stale and muddy, but when it moves and flows it becomes clear: so, too, man in his wanderings.

In his high school years this personal philosophy motivated him to contribute to his community in a meaningful way and pushed him to achieve academically. In August 2006 William was elected Co Head Prefect at Glenunga International High School (GIHS). He’d only been at the school for only 6 months. This election resulted from two things - his involvement in school activities and societies and a strongly communicated vision for what the GIHS Prefects could accomplish with ambitious and informed leadership.

One major achievement included organising a regional conference of student representatives of over 10,000 high school students in the Adelaide area to discuss common obstacles to effective student leadership. The group worked with the South Australian Department of Education and Children’s Services (DECS) to liaise with student leaders. He also actively participated in the Governing Council of GIHS and advocated for a number of significant improvements to student life.

In addition to his activity as Co Head Prefect, he was closely involved in a number of student societies including the Student Activist Alliance, the International Club, the Debating Society and the Student Council. William was also chosen to represent GIHS at a Future Leaders symposium at the University of Adelaide in 2007.

His Arabic language and presentation skills led to his selection as the keynote student speaker at the 2007 School of Languages Awards ceremony and his Adelaide-based Arabic training placed him at third year level when he began his university studies in Canberra in 2008.

Because of his involvement in the academic life at Burgmann College, including tutoring other students in Arabic and Persian, William was one of only two 1st year students to be awarded a Certificate of Academic Leadership by Principal Philip Dutton in 2008.

William’s immediate ambition is follow in the footsteps of C.A.S. Hawker by entering the Australian Army as an officer to serve Australia and the international community. This would include Afghanistan, a nation for which he has a deep fascination and which he believes occupies a critical position to achieving peace in the Middle East. His ultimate ambition is to enter Australian federal politics in order to serve the Australian community.
William is proud to call himself an Australian citizen. He’s also proud to identify himself as an Australian Citizen of the World. He’s done everything from being a kitchen hand to a temporary clerk and construction assistant. He is an energetic student with motivation and an active personality. He has a positive and constructive view of life and a strong will to succeed - and there is absolutely no doubt that he will.