Degrees: Bachelor of Arts and Bachelor of Laws
Institution: University of Adelaide
In Residence: St Mark’s College
Career Goal: To make a contribution to Australia in the public service or the military
Education History: St John’s Grammar School, Belair SA 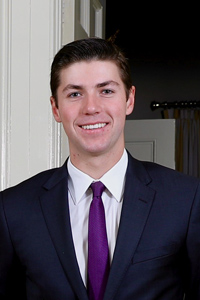 Oliver Douglas is an intelligent, focused, well balanced and service oriented young man. He is a keen academic, a serious tennis player, an excellent listener and communicator of the highest calibre.

He has demonstrated a level of maturity and wisdom exceeding what could reasonably be expected from someone of his age. He is capable of appreciating the merits of different and competing perspectives.

Oliver emigrated with his parents from England to Adelaide fifteen years ago. His secondary education was competed at St John’s Grammar School in the Adelaide Hills in 2018 with an ATAR of 98.85.

During his time at St John’s, Oliver achieved much in various leadership roles. He was School Captain, Tennis Captain and Middle School House Captain. His academic and extra curricula awards are numerous and impressive.

He is a talented tennis player who was ranked #1 South Australian u/18 player in 2019. His Australian ranking was #55. He has won numerous club, state and national singles and doubles titles. He was presented the Don Turnbull Memorial Trophy in 2019 for the best SA Male u/18 player, an award previously won by Lleyton Hewitt.

Oliver is a member of the Australian Army Reserve and a thinker. He is exercised by the big ideas of politics, civic life, history and philosophy - including economic and political globalisation forces, environmental issues, demographic changes and the role of automation and AI on future work and lifestyles.

St John’s Principal was impressed by Oliver’s trademark approach to his study which featured grit, excellent organization and persistence. He worked well with others and always went ‘the extra yard’ to ensure he achieved the highest standards.

As School Captain, Oliver was a distinguished and committed servant of the school community. Along with his co-captains, he was instrumental in establishing the St John’s Student Leadership Council, one of the most productive and innovative groups the school has ever seen.

He is a young man of integrity, with a social conscious, who is trustworthy and thinks of the interests of others.

His Deputy Principal says of Oliver that she knows that one day she will say ‘I’ve had the privilege of teaching Oliver Douglas’. He is a deserved winner of a C.A.S. Hawker Scholarship.