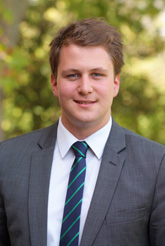 By any measure Mr. Nicholas Banks is an outstanding an inspirational young Australian. His achievements to date are remarkable and the promise of what is to come is exciting.

Nicholas graduated from Concordia College in 2011 with an ATAR of 97.75 and was awarded the prestigious Governor of South Australia SACE Commendation for both his academic achievement and excellence in learning, citizenship, communication and work.

He was the sole recipient of the Concordia Award gold medal, the highest accolade presented to a graduating student, for his leadership as School Captain and contribution to the College. He was the Open Debating Team Captain of the winning team in the South Australian Debating Association B-Grade and helped train the Concordia team.

Nicholas is a Queen Scout Award (2010) and Gold Duke of Edinburgh Award (2011) recipient. The Queen Scout is the Scouts highest possible award.

A gap year in 2012 had Nicholas involved in range of diverse activities. In April, after being judged the National Runner-Up in the Plain English Speaking Award, he represented Australia at the International Public Speaking Competition in London.

Also in 2012, he participated in the South Australian Youth Parliament and was
a key member of the organising team of The Kalahari Experience, an ongoing service program in remote southern Africa.

Throughout his education, he has grown in his passion for making a difference in the lives of others, whether in the local or global community, with a genuine empathy for their needs.

Last year he represented Australia in Bangladesh at the Asia-Pacific Region (APR) Scout Conference and Youth Forum as Australia’s Top Scout. At the Conference, attended by 35 Asia Pacific countries, Nicholas was named one of three of the APR’s Most Outstanding Scouts. There are 20 millions Scouts in the APR. Part of his achievements noted the judging panel appointed his role in establishing and running the Scouts SA Branch Youth Council and being the youngest Branch Commissioner in the history of Scouts Australia.

The Principal of Concordia College says of Nicholas that he is an outstanding young man and an exceptional leader. His capacity to analyse situations and to subsequently develop a course of action to address the issue is almost without peer amongst the thousands of students he has had contact with in a teaching career of 37 years.

Nicholas is truly committed to doing the best in all that he takes on. He believes strongly in making the most of every opportunity that presents itself and encouraging his peers to do likewise.