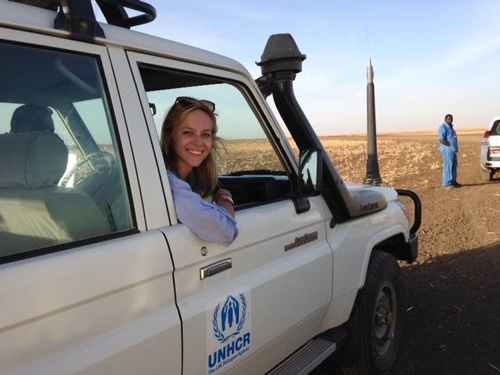 Sarah Elliott is an international human rights lawyer and advocate, currently working with the London Office of the United Nations High Commissioner for Refugees (UNHCR). Over the past eight years, Sarah has worked in the field of refugee protection and counter-trafficking in Geneva, Sudan and Egypt and is now a published author on the intersection between asylum, migration and organized crime.

After completing a bachelors (with honours) degree in Law and Arts at the University of Western Australia in 2008, Sarah took a gap year before taking up an Associateship with the Hon. Justice J.D. Heydon at the High Court of Australia. She later joined Blake Dawson Law Firm as a graduate lawyer in 2010, but quickly felt that her heart was not in her work. She yearned to use her law degree for the most vulnerable persons in society, and began volunteering as a pro-bono solicitor during evening advice sessions at the Refugee Advice and Casework Service (RACs) in Sydney.

A series of fortuitous events allowed Sarah to jump across from the firm to a position at RACS, and after being unsuccessful in securing scholarships to pursue a Masters of Philosophy in International Relations at Cambridge University in 2010, it was the C.A.S Hawker Scholarship that propelled her to pursue higher studies in 2011, with a place at Trinity College. Emboldened by the belief of the trustees in her value set, and inspired by the friends, subjects and tutorage Sarah received at Cambridge during her year there, she set off to Cairo to share her talents working in a senior role with a refugee support charity. With the pressures of the Arab spring, and a military coup, the charity shut down in 2014 and Sarah was left wondering where to go next.

The universe spoke again, and soon Sarah was managing a multi-million dollar counter-trafficking program for UNHCR, IOM and the Sudanese government based out of Kassala, Sudan. The next 1.5 years would equip Sarah with the skills of a lifetime, which she then took back to a policy position in the Asylum and Migration Unit of UNHCR’s Division of International Protection in Geneva. There, over the past three years, Sarah spearheaded new institutional policy guidance on asylum and trafficking, regularly bringing her experience and lessons learned to high level policy forums and deliberations, as well as to the development of novel capacity building tools and training programs.

In 2018, Sarah transitioned to a permanent staff position and Legal Officer role in the UNHCR London Office, where she manages various workstreams relevant to improving the lives of asylum-seekers, refugees and stateless persons in the UK. She anticipates more challenges to come post-Brexit, and aspires to completing her PHD in the future, and writing a seminal text on trafficking and displacement.