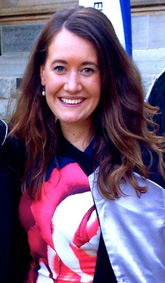 In order to attend my interview for the Hawker Scholarship; I flew back from a ski season in Whistler and forwent my volunteer position at the Vancouver Winter Olympic Games. At the time, 18 year old Sarah had some very mixed feelings about coming home, however looking back now I can see that this was truly one of the best decisions I have ever made.

The Hawker Scholarship allowed me to stay at St Mark’s College for three years from 2010-2012. During this time I met some incredible people, embraced the myriad of opportunities offered at the College and learnt a lot about myself in the process. I was President of the Charitable Foundation in 2011 and Secretary of the College Club in 2012, before departing for a year long student exchange in Stellenbosch, South Africa for 2013.

I returned to Adelaide complete my double degree in Law and Science at the University of Adelaide in 2014.

In 2015 I moved to Sydney to be Tipstaff to the Honorable John Dyson Heydon AC QC at the Royal Commission into Trade Union Governance and Corruption. In this role I attended all public and private hearings held by the Royal Commission around the country and conduced court related duties including swearing in witnesses such as Bill Shorten.

Like many past Hawker Scholars, I am now working at Maurice Blackburn Lawyers. I started my Graduate year in the Sydney office in February 2016, and am currently completing rotations in both the Class Actions team and the Superannuation and Financial Disputes team.