Currently: Partner and Head of the Australian Public Sector Practice of The Boston Consulting Group (BCG) 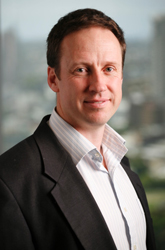 I was one of the first Hawker Scholars, based at St Marks at Adelaide University, where I did a Bachelor of Economics and Bachelor of Law (Honours). The scholarship provided me with a fabulous base from which to explore things I was interested in at university – I got heavily involved in College activities, as well as university sport and student representation. The scholarship also reinforced for me the ideals of public service and the public good, as well as understanding that there are many ways to contribute to Australia.

After Adelaide Uni, I worked as a Supreme Court Judge's Associate, then as a lawyer with Minter Ellison in Melbourne and London. I did my BCL (a Masters of Law degree) at Oxford with the support of a Rhodes Scholarship, and then joined BCG in London, before transferring back to Australia with them. While I now head BCG's Public Sector practice in Australia, my work with BCG has also covered the breadth of strategy consulting to the private sector including retailers, banks and airlines.

It has also taken me to the Middle East, PNG and a year in Cape York and elsewhere supporting Indigenous organisations pro bono. I have become heavily involved in the firm's social impact and pro bono work which has included developing and supporting the launch of the national school of government (ANZSOG) and supporting a new Indigenous-Corporate partnership model in the form of an NGO called Jawun.