Hawker Scholar: 2003 – 2005
Degree: Bachelor of Agriculture
Institution: University of Adelaide & in residence at Roseworthy Campus
Goal: to make a major contribution to regional and rural Australia through active participation in sustainable agriculture, business and marketing. 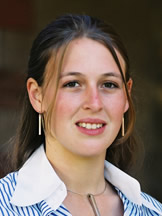 Teegan Waples was educated at the Faith Lutheran Secondary School in Tanunda in South Australia and the Adelaide TAFE. She completed her secondary education in 2001 with a Tertiary Entrance Rank of 93.6. Teegan deferred her university entrance and enrolled in and completed a Certificate 3 in Technical Production at TAFE in 2002.

Teegan is a self-confessed country girl. Her family’s grape growing property is in Eden Valley however the desire to be closer to education facilities resulted in a move to Nuriootpa in the Barossa Valley.

Teegan has excelled academically throughout her secondary education. She demonstrated a thoroughness and attention to detail in her work and achieved her many goals. As School Captain at Faith, she had to juggle her responsibilities in that position with her academic work. Teegan is an excellent communicator and is comfortable and confident addressing large audiences and conducting meetings.

She has an interest in theatre and has been involved with a number of productions including ‘The King and I’ and ‘Nutcracker’. Teegan has been involved with the United Nations Youth Association, the Youth Parliament and was the local regional winner of the Lions Youth of the Year in 2001.
Teegan is an Oliphant Science Awards prizewinner and represented her school in public speaking, choir work, on the Student Representative Villages and fund raising committee.

Teegan has always felt passionately about the importance of agriculture to Australia and intends to make a major contribution to the sustainable future of this important industry.

Teegan is studying a Bachelor of Agriculture at the University of Adelaide and is the first Hawker Scholar in residence at Roseworthy Campus.