Hawker Scholar: 2007 - 2010
Degree: Bachelor of Arts & Bachelor of Laws
Institution: ANU In Residence: Burgmann College
Career Goal: To enter either politics or the public service (Dept of Foreign Affairs and Trade or AusAID) or work for the International Commission for Jurists, Centre for Democratic Institutions, United Nations or Australian Strategic Policy Institute. 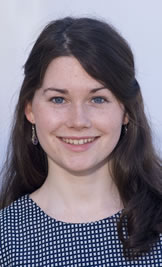 Rose Bollard was School Captain at Sydney Girls High School in 2006 and was an outstanding student academically and in debating. Rose graduated with a UAI of 98.5. She was active on the sporting field, playing netball, water polo and rowing. She was a highly regarded member of the school and the local community.

These achievements and activities were recognised last year when Rose was awarded the Minister's Award for Excellence in Student Achievement which celebrated respect, integrity and a commitment to excellence in an array of activities.

In 2005 Rose became more aware of the importance of the political process through attending the NSW Schools Constitutional Convention. She was chosen to attend the National Schools Constitutional Convention in 2006. This experience made her realise that policy making is one of the most effective ways to bring about change. This sparked her interest in working for the government to improve Australia.

Debating is one of her greatest interests. She enjoys examining national and global issues from different perspectives, which forces her to reconsider her opinions and be more empathetic to others' ideas.

In 2005 she attended Combined Schools Leadership training at NSW Parliament House and the Future Leaders Forum in 2006. This experience provided her with valuable leadership skills in a variety of fields. In 2006 Rose was awarded The Garvin Prize for Leadership and Influence at Sydney Girls High School.

She has collected money for charities including Legacy, Red Cross and Jeans for Genes Day. In 2005 she initiated and organised a year 12 Red Cross blood donation drive. She liased with the Red Cross, organised transport, obtained permission from various parties and recruited volunteers.

She achieved excellent results and numerous academic awards during her time at SGHS in a range of subjects, including French, English, Latin, the Classics and History.

She has acted and directed school plays, reads Latin, lived in France for 3 months as an exchange student learning French - which she is continuing to study at ANU - and has undertaken work experience at an Aboriginal Women's Legal Centre which provided her with insights into the many problems faced by Aboriginal women. She hopes that by studying law, she will be able to make a difference to society in many ways, with Aboriginal issues an area of particular concern.

Rose believes she is fortunate to live in Australia within a robust democracy where people don't live in fear and most people have access to shelter, education, food, water and healthcare. Her passion is to have a life and career that safeguards and extends these living standards to all Australians, and that furthers Australia's interests, both nationally and internationally.

She has always been a highly motivated person and is very passionate about things that interest or concern her.

Her attitude to all aspects of her life is summed up by Elbert Hubbert's words, "nothing great is ever achieved without enthusiasm".

She is an outstanding young Australian.