Degree: Bachelor of Medicine and Surgery
Institution: University of Adelaide
In Residence: St Mark’s College
Career Goal: To work towards closing the gap that exists in health care between the wealthy and the less privileged at a national and international level
Education History: Pembroke School Adelaide 1999 - 2012 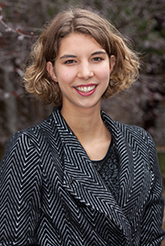 Roberta Potamianos was an outstanding student across the full range of her IB subjects completed in 2012 at Pembroke School in Adelaide. Her ATAR was 99.75. Her academic results are an indication of her longstanding overall ability, diligence and academic engagement.

Roberta was accepted into Medicine at Adelaide University after scoring in the 99th percentile in the UMAT. Roberta deferred the University of Adelaide offer to 2014.

But there is so much more to Ms Potamianos than being an outstanding student in the classroom and chemistry laboratory.

She is a netball coach, a tap dance tutor, since the age of 5 she has trained in classical ballet, contemporary, jazz and tap dancing, she has worked with the ILO in Geneva and volunteered with Meals on Wheel in Adelaide, she has debated, represented South Australia as a high jumper and performed in various musical and stage productions.

Her amateur and professional stage credits include the State Opera of South Australia’s The Ring Cycle and La Boheme, Windmill’s production of Snugglepot and Cuddlepie, Hubcap Productions Dust The Musical and being a singer in a rock and roll band at Marree in outback South Australia.

Dust The Musical highlighted asbestos exposure and its disastrous health consequence of mesothelioma in the Australian community, especially amongst those from rural working class backgrounds. Being a part of this unionist-supported piece of ‘theatre for change’ contributed to her desire to address such health injustices in the future.

Pembroke School’s Marree exchange programme allowed Roberta to spend a week working with the indigenous population of Marree in northern South Australia. She learnt about their way of life, their connection to the land, respect for nature and a simplicity, which is lacking in a hectic technological and commercial Western World.

This experience led Roberta to think about the confronting issue raised by Professor Fiona Stanley in the 2008 Annual Hawke Lecture The Greatest Injustice - Why we have failed to improve the health of Aboriginal people. She believes these ethical issues require greater dedication.

As a member of her school service committee, Roberta was part of the team that raised money and awareness for the Birthing Kit Foundation Australia (BKFA), and then assembled the kits before they were sent for use in Ethiopia. The involvement with BKFA gave her a greater insight into the inequality that exists in fundamental health care around the world and increased her appreciation for NGOs like BKFA and Medecins Sans Frontieres (MSF).

On the sporting field Roberta has played and participated in a variety of sports including netball, tennis, basketball, soccer, orienteering, triathlon and athletics.

She participated in the Pembroke School French exchange trip in 2011 and was chosen as a School representative for a three-month exchange at Trinity College School in Ontario Canada in 2010.

In 2014 she spent three months in Italy improving her already sound ability to speak Italian and also built on her Italian heritage with work at the University of Bologna.

Roberta has a degree of maturity, poise and confidence born of her abilities and her empathy for others. She has a drive to learn and experience as much as she can across her wide circle of interests. Roberta Potamianos will make a difference wherever her future takes her.