Hawker Scholar: 2007 – 2010
Degree: Bachelor of Laws / International Studies
Institution: University of Adelaide
In Residence: St Mark’s College
Career Goal: A position in the United Nations and playing an active role in Australia’s future as a member of the global community. 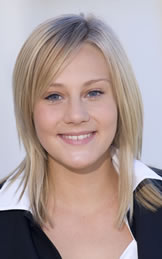 Ms Rebecca Schultz attended Seymour College in Adelaide from 1997 to 2006 and graduated with a TER of 99.65.

Rebecca is a dynamic, charismatic young woman known for her vivacious nature, keen sense of humour and warm personality. She is an innovative creative thinker. Rebecca has a gift for relating to other people.

In Year 12, Rebecca achieved Merit scores of 20 in Drama Studies, English Studies and Studies of Religion, and the State Theatre South Australia Award for Excellence in Drama.

As School Captain of Seymour College in 2006, the many and varied challenges of leading and being led by a large group of girls enriched her Year 12 studies. She was also a member of the Seymour College Mock Trial team in 2004 and 2005, and in both years, her team won the State Grand Final, and Rebecca won the individual award of ‘Best Barrister’.

She has been actively involved in Seymour College’s debating program for many years, as a team member or coach, culminating in her Senior A1 team winning the State Grand Final in 2006. In recognition of her involvement in debating, she was awarded a Seymour Debating Pocket in both 2005 and 2006. She was also a member of the South Australian Debating Team in 2005, and invited to be a member in 2006, but was unable to participate due to school commitments. During her time as a ‘State Debater’, she was coached by Hawker Scholar Alison Lloyd-Wright, gaining many skills in communication and argument.

Rebecca also participated in many public speaking competitions which furthered her education in ‘the art of persuasion’. In 2005 she was awarded First Prize in the Probus Public Speaking Competition, and was a State Finalist in both the Rostrum Voice of Youth and the Plain English Speaking Competitions.

As School Captain and member of the Seymour community, Rebecca has been actively involved in many service activities – everything from selling badges to organizing stalls at the school’s service fair and raising money for the disadvantaged in Australia and overseas.

Rebecca also participated in The Smith Family’s Student2Student reading program, in which she was a reading tutor to a child who was behind in their reading progress. She looks forward to being involved in many of the voluntary organisations which have aided her school progress. She intends to be involved in both the South Australian Debating Association as well as the Rostrum Voice of Youth in 2007.

While the academic side of life at Seymour kept her busy, she has also been keenly involved in the College sporting program.

Through interschool netball and athletics from 2002 to 2006, she gained a better understanding of teamwork, perseverance and the hard work required in training for an event.

In 2003, 2004 and 2006 she was awarded the Seymour Sports Day Cup. In 2004, Rebecca achieved First Place in the SASSSA Track and Field Championships for her 400m and 800m runs. In addition, she was a member of the winning team in the State Team Triathlon Championships in 2004.