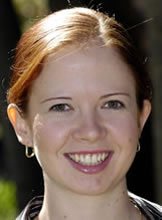 Megan Davis was educated at Fairholme College in Toowoomba on the Darling Downs, graduating in 1999. She completed Bachelor of Arts / Bachelor of Business degrees at the University of Southern Queensland (USQ) in 2003.

Megan is proud of her contribution to the community and in 1999 was awarded an Order of Australia Medal for citizenship and her contribution to her school and the community. As well as her staff and student elected position of Head Girl at Fairholme College, Megan was elected by her peers to the position of President of the College’s Interact Club, the largest in Australia.

During her time as President, the club raised $27,000 for charity.
Megan attended the 1999 Australian Student Leadership Conference and was subsequently recruited by AUSTRAIN and the Australian Youth Development Program to assist in delivering several three-day leadership conferences to hundreds of school captains.

Megan also participated in the Youth Leadership Convention for World Vision. This experience taught her many valuable skills needed for charitable fundraising and was a major influence in focusing her career goal to improve people’s lives through Social Marketing.

Megan is an all rounder. She enjoys playing a range of sports however cricket is her main interest as both a player and a coach. She is an accredited ACB Level 0 coach. She has been received numerous Rotary, Department of Families, Youth and Community Care, Lions Youth of the Year and Mayne Nickless Community Service Awards.

Megan has been actively involved in all facets of student and faculty life at University of Southern Queensland and at ANU has been approached to become involved in Students In Free Enterprise (SIFE), a non-profit organization involved in ‘learning, practicing and teaching the principles of free enterprise, thereby improving the standard of living for millions in the process’.

Megan Davis is a high achiever with a strong commitment to the broader community and has clearly demonstrated the attributes of a Charles Allan Seymour Hawker Scholar.