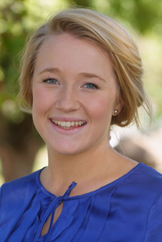 Madeleine is an extraordinary young woman. She has a strong sense of social justice, service to country and the importance of all round achievement. She was College Captain and completed the International Baccalaureate Diploma Programme in November 2008 at Monte Sant’ Angelo Mercy College in Sydney with a TER of 98.25.

Throughout her College career, Madeleine amassed an almost endless collection of awards in every dimension of College life. The awards have been a result of steadfast application, natural ability and ever present intellectual curiosity allied with a personal passion to seek truth in its various contexts.

Her IB results are remarkable. She achieved first place in higher level English, Biology and Economics and standard level Mathematics and Music.

She is passionate about economics and the role it can play in improving the lives of millions worldwide. She is inspired by the concepts of micro-finance and grass roots aid and would like to influence economic policy within Australia and its neighbouring regions particularly that affecting indigenous Australians. She hopes to work within the Australian political field, for a non-government organisation committed to development or for an economic institution such as the IMF.

As part of the IB Programme she completed an extended essay focusing on the economic situation of Mutitjulu, a remote Aboriginal community in the Northern Territory. She investigated community unemployment and reasons for it, the effects of prior government policies and possible ways to stimulate economic activity within the community. She was confronted with the injustices that exist in Australia and began to question the messages portrayed by the media and the decisions made by Australian governments.

In 2006 Madeleine was chosen to attend a Global Young Leaders Conference in Washington D.C. and New York which focused on world issues and simulated international debate of current world climate and economic challenges.

Educated by Mercy women, she was constantly encouraged to seek out social injustice and do something about it. In 2008 she took part in her first Edmund Rice Children’s Camp, a weeklong camp designed to give kids in ‘underprivileged’ or ‘disadvantaged’ situations a one-week holiday to have fun and just be kids.

The joy in the kids’ faces after a day on camp was enough to bring her back in 2009 when she took up the additional challenge of being the camp’s Team Leader. This role meant coordinating the activity program for twenty young adults and twenty kids and ensuring the week ran smoothly. Madeleine plans to continue her involvement in the camps in coming years.

Madeleine has a strong sense of faith and in 2005 she was part of a pilgrimage to Cologne for World Youth Day, following the footsteps of St Paul throughout Greece, Turkey, Poland and Germany. In 2006 she went on a two-month exchange to Germany, staying with a family in the small town of Hohnstein in the East Saxony region.

She is a passionate musician. She has studied voice for seven years and euphonium for eight years. She has sung with the Australian wide choir Gondwana Voices, been part of many school ensembles and a Music Tour to New Zealand in 2005. She has sung solo at school events, weddings and in school musical productions.

In addition to all of these achievements, Madeleine was a keen debater and public speaker as well as a member of the hockey, netball, touch football, cross country and swimming teams.

In 2008, the College acknowledged Madeleine’s qualities by awarding her the Monte Sant’ Angelo Mercy College Award for Christian Leadership and the Mother Ignatius McQuoin Award for the Girl who most Personifies the School Motto Religio Scientia Cultus (Religion, Knowledge Culture).