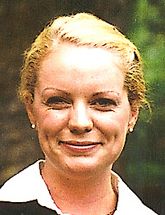 Katherine Ashby was born at Bendigo in Victoria. She attended the Flora Hill Secondary College and the Bendigo Senior Secondary College where she successfully completed her secondary studies in 2000. She studied English, Political, Legal and International Studies, German and Biology.

Katherine's VCE score was 98.35. She was College Dux of Political Studies with a score of 48, placing her 7th in Victoria within the subject. While she has, and no doubt will continue to be an exceptional academic student, Katherine is proudest of her participation in a range of school and community activities over recent years.

She was named 'Student of the Year for 2000', presented to the student who achieves 'high academic results, involves themselves in many extra-curricular activities and displays strong leadership qualities.' Katherine was also awarded the Education Trust Victoria Student Leadership Award last year through the Victorian Department of Education.

Katherine has already displayed a strong commitment to the ideals upon which the Hawker Scholarship is founded.

As part of the Talkback Classroom programme on ABC Radio last year, she interviewed Federal Minister for Health Dr. Michael Wooldridge. She subsequently began a rural version of the programme in the Bendigo area to discuss local issues.

Katherine is a resident at Burgmann College and is enrolled at the Australian National University in Canberra. She is in her first year of a Bachelor of Arts/Law Degree. Katherine intends to use her degree as the foundation of her intended career as a Member of Parliament.