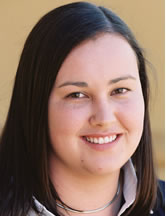 Heidi Thompson grew up at Wandilo, a small rural community a short distance from Mt. Gambier in the South East of South Australia. Heidi attended the Mulga Street Primary School and successfully completed her secondary studies last year at the Mt. Gambier High School. Her subjects included English, Legal, Social and Geography Studies and Biology. Heidi's tertiary entrance rank at the completion of her secondary studies was 92.05.

In 2000, Heidi was School Captain, co-chair of the SSC and member of the school council at Mt. Gambier High School. She is an accomplished musician, enjoys calisthenics, tennis and swimming and has won numerous debating awards. She was a participant in the Rostrum Voice of Youth Competition, the Lions Youth of the Year and the Apex and Glossop debating teams.

Heidi is now a resident here at St. Mark's College and is studying at the University of South Australia where she is enrolled in the Bachelor of Arts in Journalism Degree.

Heidi has been politically aware for much of her life. Heidi has already indicated a keen interest in the workings of the State and Australian Parliaments. She has represented her school at the Highlife Leadership Seminar held in Adelaide in 1999 and the Governor's School Leader's Reception at Government House.

Heidi has already displayed a strong commitment to the ideals upon which the Hawker Scholarship is founded. She has an inquiring mind, she sets and achieves personal goals and seeks through her efforts to better herself and as a result to make Australia a better country.