Degree: Bachelor of Development Studies & Bachelor of Laws
Institution: University of Adelaide
In Residence: St Mark’s College
Career Goal: To pursue a career in social justice and international affairs, working for an NGO or in politics. 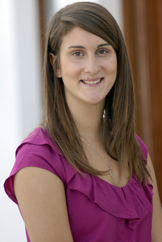 Georgina Spanos has been privileged to grow up in a nurturing and supportive home environment with a family who instilled in her solid life values and respect for all people. Her Greek heritage and the multicultural make up of the Riverland in South Australia allowed her to interact with people from different cultures and backgrounds and gave her a strong social awareness. Georgina worked on her family’s fruit property from an early age and this gave her an understanding of rural communities and a strong work ethic.

Georgina attended Renmark North Primary School and Renmark High School until year 10. During this time I represented her school in a wide range of sports, excelling in athletics and cross-country. She was actively involved in local volleyball, coaching and umpiring as well as representing her school at the National Schools Cup in Melbourne in 2003, 2004 and 2005. She coordinated the Spike Zone volleyball competition for primary school students in 2005. The competition aimed to provide participants with basic skills and confidence in the sport.

During her years at Renmark High School she was a member of the Student Representative Council. She worked with teachers and students on the Drug Strategy Program and the transition program and represented her school at the National Young Leaders Conference and Amnesty International Youth Conference. In her final year at Renmark High School she was awarded the Caltex Best All Rounder Medal for her academic success, conduct and behaviour and commitment to the school through sports and service.

Having spent a great deal of her life on the Murray River, Georgina recognises the importance of water safety, swimming, survival techniques and lifesaving knowledge. Since 1995 she have been a committed participant in the Royal Life Saving Society’s Vacswim programme. In 2005 she gained the Bronze Cross Award and Instructors Certificate.

She continues to work in the Vacswim programme and recently gained her Austswim qualification to teach Primary School students during term time.

This allowed her to communicate the importance of safe water practices to children of different ages, cultures and ability levels and to develop her communication and leadership skills.

In 2005 she was awarded a scholarship to complete her final two years of secondary education as a boarder at Pembroke School in Adelaide. This opportunity helped her to grow in confidence. She was exposed to new and challenging experiences. At the end of her first year, she was elected by her peers to Head Girl of Turner House for 2007. In this role she encouraged active participation of the girls by organizing a range of boarding house events, advocated on their behalf, liaised with the boarding house staff and acted as a positive role model. She graduated with a TER of 95.05.

In conjunction with her boarding duties, she represented the student body on the Student Staff Executive and contributed to the school by speaking at school assemblies, organising social and charity fundraising events and taking on the role of secretary. Her leadership skills and general organisation have developed as a result of these roles. At the conclusion of her final year at Pembroke, Georgina was awarded the Patricia Loy Citizenship Award for the Head Girl of Turner House and the Kaye M. Mitchell Award for Outstanding Leadership in, and Service to the School, by a year 12 girl.

During year 12 she was selected to take a GAP exchange in 2008 to Trinity College School in Ontario, Canada. As an overseas assistant, she was involved in all aspects of life in the Junior School - coaching, tutoring, supervising school camps and being part of the Senior School boarding community.

While on exchange, she travelled the east and west coast of Canada as well as the Caribbean Islands of Cuba and Barbados. She found Cuba to be challenging yet enlightening as it exposed her to an alternate culture and political system. She learnt a lot about the world and herself during these travels and her independence grew.

Georgina is particularly interested in human rights and national and international affairs. She has been a member of Amnesty International since year 10 and supported her local branch of Save the Children in fundraising to deliver immediate and lasting improvements to children’s lives worldwide.

Her year 12 studies in Geography, Modern History and Legal Studies allowed her to pursue this interest. She researched the Sudan genocide, Australia’s anti-terrorism laws and whether they comply with the Rule of Law and Natural Justice as well as Dietrich Bonhoffer’s opposition to Nazism.

Her interest and knowledge in these topics highlighted the importance of acknowledging our past and making sure we step forward into a future free from persecution, a world where all citizens are entitled to the most fundamental human rights.