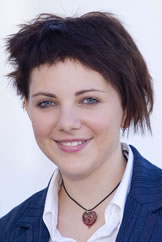 Ms Gemma Nourse graduated from the Darwin High School in 2006 with a TER of 97.25. She is a vibrant, capable, hardworking, self-motivated and studious person with outstanding social and leadership skills who loves life. She is inspired by various characters created by the writer Roald Dahl, loves debating, writing and making music.

Like most of her family before her, including her mother and father, Gemma attended the Darwin High School. Her father earlier this year finally returned a book he’d borrowed from the school library 26 years ago! Fortunately the school didn’t charge any overdue fees. Gemma reckons he’d probably have had to sell the house to pay the bill!

Gemma studied English, Maths, Politics, Economics and Modern History in her senior year. She enjoys science subjects, but has a passion for the humanities. She has a thirst for knowledge about politics and world events, believing that no matter how much she learns, there is still much more she wants to know.

Gemma represented the Northern Territory at the National School Debating Championships in 2006 and she was heavily involved in her local and school communities.

She was secretary of the Darwin High Round Table. She organised and participated in events ranging from book launches to the 40 Hour Famine and World Vision’s Global Leadership Convention in 2006.

She was one of the founding members of Darwin High School’s Youth Justice Group which raises funds for groups such as TEAR Australia, the Oaktree Foundation and World Vision. The group raised awareness within the school community of the problems dealt with by these organisations.

Gemma is passionate about making music. She’s the bassist and vocalist with her band Scarlet Revenge. The group performed at school events including the Lunch Aid Concert for the Make Poverty History campaign.

The group played at a concert for National Youth Week, another Darwin band’s album launch, VET music concerts - and they get regular spots at a local venue in Darwin. Gemma plays acoustic guitar and electric bass. She’s a bit rusty on the piano, a great tambourinist and a struggling harmonica player.

Gemma’s other interests include writing. This has resulted in her joining a youth newspaper run by the Darwin City Council called “GRIND” as a journalist.

Gemma also enjoys drama and has acted in a number of school and community productions as well as in a WW2 ABC mini-drama in locations around the Darwin High School.

She would enjoy getting involved in economic development in third world countries. Although the international stage is appealing, she would initially prefer working on issues within Australia. She would like to encourage debate in this country about human rights and environmental issues including global warming.

Gemma is a self confessed, passionate true blue Australian. She is only the second Hawker Scholar to come from the Northern Territory. She’ll make waves, great music and brighten the lives of many.