Hawker Scholar: 2007 – 2010
Degree: Bachelor of Arts & Bachelor of Laws
Institution: ANU
In Residence: Burgmann College
Career Goal: To work with the Australian Human Rights and Equal Opportunity Commission, an NGO or a role in Australian politics. 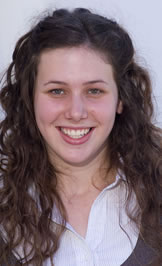 Ms Ellen Chapple completed her HSC at Penrith Selective Academic High School in 2006 with a TER of 99.8 and won the Honour Award in 2006, the school’s highest merit award in recognition of her qualities of service to the school in the areas of academic achievement, leadership, initiative, diligence, decorum and citizenship.

Ellen is a third generation Australian who grew up and lived in regional Australia, on an acreage of bushland with her father, mother and younger brother. Living amongst native flora and fauna granted her an insight into the importance of preserving native bushland in Australia, increasingly threatened by urbanisation.

She is a volunteer with Bushcare Australia and a volunteer at Ebenezer Church, raising funds to preserve the oldest church in Australia.

She is a passionate, motivated person with a myriad of interests, is a member of the local drama club the Richmond Players, various sporting teams and has been involved in community actions against developments and subdivisions.

She was a barrister for the school’s Mock Trial team in 2005, and reached the state elimination rounds. Selected for the United Nations Youth Association Camp and sponsored by Penrith Rotary Club, Ellen participated in mock General Assembly debating and competed in the regional round of MUNA, the mock United Nations assembly, representing New Zealand.

As a leader within her school community, she coordinated Peer Support activities, spoke at student forums as a Student Welfare Leader and coordinated public speaking events, including coaching both junior debating teams and the Mock Trial team and adjudication.

In 2005 Ellen was selected as one of twenty girls from NSW for the UBS Women’s Leadership Academy and in 2004 the World Vision ‘Vision Possible’ youth leadership camp, which involved coordination of the Forty Hour Famine within her school. In 2006 she was selected to attend the Women’s Leadership Forum in Parliament House, and the Future Leaders Forum at the Sydney Opera House.

Ellen has represented her school in volleyball, soccer, netball and hockey and achieved the Silver Duke of Edinburgh Award.

She has organised blood donations in the school for the Red Cross and was awarded the Lions Club Citizenship Award for a Senior Student in 2006. She was part of the school’s Amnesty International group which organised and participated in Day of Silence, Harmony Day and fund raising, including raising awareness within the school community about social justice issues.

This involvement raised her awareness and sparked a commitment for a career involving the protection of human rights.

Ellen is concerned about the injustices suffered by many Australians. She hopes being qualified in law will allow her to work either with Legal Aid to improve representation for economically disadvantaged Australians or with organisations to campaign for change.

Her life’s work is to erase some of the inequalities in Australian society. She is an outstanding young Australian.