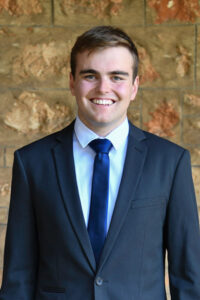 William Gillett is an intelligent, capable young man and a respected leader amongst his peers. He is committed to making his community better and contributing to the future of Australia.

William grew up in the Riverland town of Loxton in South Australia. He distinguished himself during his time at the Loxton High School. He was appointed SRC President in 2018 and the school’s Head Prefect in 2020.

During this time, he formed strong and mutually respectful relationships with staff and students. His fellow students looked up to him and saw him as a role model who they could aspire to follow. He led by example.

He earned the respect of key players in the Loxton community and was recognised with numerous awards. In 2019 William was recognised as both Loxton and the Riverland’s Young Person of the Year and the Order of Australia student citizen of the year. In 2020 he was named as one of the State Governor’s Civics & Citizenship Student award recipients and selected as the Murraylands Representative in the State Young Rural Ambassador Award.

His work both in and beyond the school, demonstrated his care and concern for others as well as a strong commitment to improving the life of his local community. William served on the Youth Environmental Council and the River Murray Youth Council.

William was an active participant in both the Loxton tennis and swimming clubs. William was always concerned with the wellbeing of others. He participated in the anti-bullying group at Loxton High and volunteered at Riverview Rest Home to complete the hours required to achieve his Bronze Duke of Edinburgh Award.

He is a focused, well balanced and service oriented young man. He is a keen academic, a good listener, and a confident communicator.

William was selected to attend the Rotary Adventure in Citizenship. He spent a week in Canberra undertaking a variety of activities focussing on leadership, governance, and politics. William was the State Winner of the National History Challenge and won a merit award for the ANZAC School Spirit Prize and was a student panellist on the ABC’s Q&A program in 2019.

During a gap year in 2020, he worked as a Business Administration Trainee for his local member of parliament Tim Whetstone MP and completed a Certificate 3 in Business through Tafe SA.

Loxton Principal David Garrett believes William is a truly unique character who has an enormous range of interests and passions. He is a risk taker in the best possible way. He strongly believes in giving things a go. He looks for opportunities and works hard to make the most of them.

He is a young man of integrity, with a social conscience, who is trustworthy and has a deep commitment to improving the lives of others.