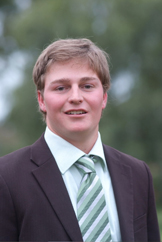 Wallace Dunsdon is from a rural property just outside of Cunnamulla in South West Queensland. He attended the school of distance education and local school for his primary education before going to the Toowoomba Preparatory School for year 7. His secondary education was completed at the Anglican Church Grammar School (Churchie) in Brisbane as a boarder.

At Churchie, he was heavily involved in the school rowing program. He was a member of the Schools First VIII crew (2003 and 2004) and was boatshed vice captain in 2004. He was selected to represent Queensland in the 2003 and 2004 State Rowing Championships.

Wallace is an able student who applies himself to his academic studies. He is self-motivated and an independent thinker. He was successful in a number of academic competitions including Mathematics, Chemistry and English. In 2004 he received the Technical Studies Subject Prize and the Ian Cameron Design Award.

He represented Churchie in Rowing, Australian Rules Football, Rugby and Cricket, winning full and half colours in a number of these sports and was judged to be Rugby’s best and fairest in 2000 and most improved in 2003.

He spent 2005 working on the family property during the worst drought on record. This was beneficial to his personal rural development and his family business would not have functioned without additional drought labor support.

In 2007 as part of the Marcus Oldham curriculum, he worked for Suncorp as an Agribusiness Officer in the large NSW rural town of Wagga Wagga. His position involved working one-on-one with the Business Banking Manager in refinancing clients as well as looking after existing customers’ business needs.

With his long-term goal to enter into rural business consultancy, this initial year in a large Agribusiness bank was the first step in his consultancy development.

In the future Wallace plans to target the more marginal semi arid regions where rural consultancy is difficult to access, due to the lack of resources and technology. This will provide rural businesses the opportunity to accurately benchmark themselves against other commercial and rural businesses.

He believes his current Marcus Oldham Business course, time working in the Agribusiness Bank and with other rural consultants, will develop a detailed knowledge base and prepare him well for his chosen career.

Wallace also has a keen interest in sustainable rural property development, in particular with irrigation, cropping and animal production systems. He’s a keen sportsman and is involved in club rugby, social tennis and water skiing.

Wallace is a highly organised young man who has a positive outlook on life and is well regarded by his peers. Wallace Dunsdon will make a difference in rural Australia.