Degree: Bachelor of Economics / Laws
Institution: Australian National University
In Residence: Burgmann College
Career Goal: A career in the Federal Treasury and representing Australia as a delegate to the UN 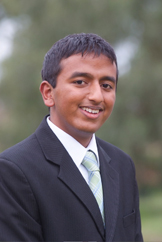 Vithiyasagar Sritharan is an exceptional young leader and has attained excellent academic results at Dubbo College in NSW. He possesses natural leadership skills and has demonstrated confidence, initiative and maturity in his role as School Captain in 2007. He was an active member of the Student Representative Council (SRC) and displayed genuine conviction for improving the quality of lives of students at the College. Vithiyasagar graduated in 2007 with a UAI of 97.9.

His background and upbringing have helped him develop into a mature young adult thankful for the opportunities Australia has provided. He was born in Jaffna, Sri Lanka in 1989 in the midst of an ongoing civil war which claimed the lives and livelihoods of thousands Sri Lankan civilians.

In 1990 his parents migrated to Australia to give his older sister, brother and him better life opportunities. Australia is the ‘Lucky Country’ and Vithiyasagar believes he is living in the best country in the world.

Dubbo is a country town in rural NSW with a population of 40,000 and the Sritharan family have called it home since 1990. Dubbo College is Dubbo’s only public secondary high school. The school gave Vithiyasagar a range of opportunities to excel not only academically, but also in leadership and community endeavours.

In year 11, he was rewarded with an Outstanding Academic Achievement Award at the Dubbo College Annual Awards Presentation Night. He also received a Distinction Award in 2005 for the Australian Financial Literacy Assessment held by UNSW.

His position as School Captain allowed him to develop strong leadership skills and to participate in the School Captains’ conference in Sydney in July 2007, plan, organise, chair and speak at a variety of school assemblies and functions, and represent Dubbo College at various community events including ANZAC Day and Remembrance Day. It also allowed him to be a positive role model for younger students and heavily involved in the school and wider community.

In 2006, as a member of the SRC, he was chosen as a delegate of the school to attend a Young Leaders Conference and also a Student Learning Conference in Sydney. His involvement in the school community and school leadership has been rewarded with The Australian Defence Force Academy School Leadership Award and Scholarship in 2006, the Free Masons’ Young Achiever Award and Scholarship in 2007, the Youth Recognition Award in Dubbo Youth Week 2007 and a nomination by Dubbo College for the Pride of Australia Medal for 2007 in the categories of Community Spirit and Role Model.

He has always been heavily involved and interested in the wider Dubbo community. He has performed in Multicultural Festivals and also participated for several years in the Dubbo Eisteddfod in piano and public speaking.

He has also been involved in the organisation of the Central West Sri Lankan Cricket Tournament in 2005. He plays tennis and soccer and is a passionate cricket fan, playing for the RSL Colts Cricket Club from 1996 to 2006.

He’s very interested in Economics and Law. Both subjects are vital in the daily governance and functioning of a society. He believes Australians are privileged to live in a society governed by the rule of law, allowing us to be free and have our rights and responsibilities protected and enforced.

He’s yet to decide on a definite career path however he’s sure whatever he chooses to do will be of benefit to the Australian community, especially in the area of income inequality issues and becoming a more egalitarian society.

He is a young adult of the finest quality whose integrity, honesty and motivation places him in excellent stead for the future.