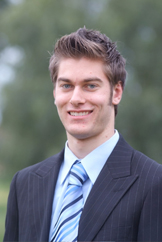 Trent Grgich is an outstanding student. He achieved straight A-grades in year 12 at Hale School, Western Australia in the most demanding Science and Mathematics subjects and French and Literature. His breadth of achievement is impressive. His TER was 99.3. Trent has a great ambition, motivation, perseverance and a hunger for knowledge. He’s a thinker, independently minded and self disciplined.

Trent’s mother emigrated from England. His father, at the age 18, with a small suitcase and eight dollars to his name, emigrated from Croatia. They met and married in Australia. Trent’s only sibling, brother Paul, was a Melbourne National Scholar and is completing a PhD in Geomatics and Science at the University of Melbourne.

Trent has had a long-standing interest in future renewable energy sources. His year 10 and 11 physics research assignments were on how wind turbines and solar panels work and an investigation of nuclear fission and fusion. He was selected as one of 288 students from 2000 applicants across Australia for the National Youth Science Forum (NSYF) in January 2007.

After hearing presentations on how solar panel efficiency is being improved and talking with a number of electrical engineers, he’s become fixated on his chosen career path in solar energy. In a country with such abundant sunlight, Trent believes it’s a logical and necessary development for Australia.

Studying a Science and Engineering double degree at ANU will allow him to contribute to this important development.

He is critical of the lack of Government funding for the research and development of renewable technologies. Trent intends to do what he can to encourage an increase in funding in the future. He is working on coordinating a petition with other students from the NYSF to this end.

He was one of 29 students selected from the 288 students at NYSF in January 2007 to train as a potential staff member in Canberra in 2007. The aim of the 5-day training program was to advance leadership skills and prepare participants to run the 2008 Forum. Selection was based on leadership potential and other attributes.

Trent is an avid debater. In 2007 he participated in the Western Australian Debating League in the Hale School team and was presented with Debating Symbols. He enjoys travel and the experiences it provides.

He went to France on an exchange program in 2006 and enjoyed the immersion in a foreign and intriguing language, culture and way of life. He is a relatively fluent French speaker and would like to further advance his French language skills and cultural awareness in another French exchange while at university.

France remains a place of interest with the emerging renewable energy market and the construction of the Tour Generali in Paris, which boasts 800m2 of solar panels and 18 axial wind turbines to help power it.

Trent Grgich is a committed academic and a leader with a great ability to engage in a positive and constructive manner with his peers. Australia needs Trent to make a difference. There is no doubt he will.