Degree: Bachelor of Arts & Bachelor Laws
Institution: Australian National University
In Residence: Burgmann College
Career Goal: To serve time as an officer in the Australian Army, and to pursue a career in Australian politics, the United Nations, an NGO, foreign relations or diplomacy. 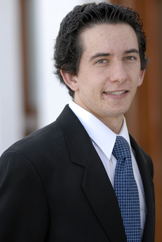 Stuart Bryson is an inspirational young achiever who always displays integrity and ingenuity. Stuart was School Captain at Penrith Selective High School in 2008 and achieved a UAI of 95.9.

Young people today are the leaders of tomorrow. Stuart believes the enthusiasm and idealism of young people should be utilized and their ideas heard. For much of his secondary education, he has been involved in giving youth a voice.

He was selected to represent Australia at the 40th Annual The Hague International Model United Nations, held in The Hague in 2008. He proposed a successful resolution in the Disarmament Commission on Nuclear Non-Proliferation and had the opportunity with other Australian delegates to sit on a World Health Organisation Youth Policy Panel in Geneva.

The WHO used the group’s suggestions to help form a ‘youth policy’ on health, especially in developing countries and how it related to climate change. His experiences in Europe are fundamental in his determination to become an Australian ambassador or diplomat in the future.

Meeting with other young people from around the world in the model UN confirmed in his mind his career path. He believes Australia can play an integral part in negotiations and believes Australian diplomacy to be pragmatic and fair.

He has a demonstrated passion for international relations and Australia’s evolving place in the world. In January 2008 Stuart participated in the International Crisis Group in Brussels, Belgium.

He is an executive member of the United Nations Youth Association of NSW, an empowering organisation which enables young people to express their ideas. He plans to further engage young people in regional Australia through a bold education policy for the organisation. He believes young Australians are great visionaries and offer refreshingly practical ideas and solutions for pressing issues.

As Penrith Selective High School Captain and Student Leader in 2008, he developed a strong motivation to contribute to his school and community. He competed in the Premier’s Debating Challenge, reaching the State Semi-final on two occasions and was awarded Lions Club Western Sydney Youth of the Year in 2007.

In 2006 and 2007 he was awarded the “Most Promising Young Leader” Award at the National Rotary Club MUNA competitions. He has presented the keynote speaker address at a NSW level of the competition on topics such as “Youth Leadership – Empowerment” and “Australia as a Leader in the United Nations”. Stuart was also a state semi-finalist in the Sydney Morning Herald Public Speaking Competition for 2008 and a Regional winner in 2007.

As School Captain, he organised and convened the Penrith School’s Australia 2020 Youth Summit. The submission contributed to the final Federal Government Report. This involved coordinating workshops, information booklets and assembling results and compiling a 4000-word report.

Stuart is an all rounder. He was captain of the school cricket team and has played cricket at local and club level for nine years. As a volunteer youth reporter for the local Penrith Press newspaper in 2007, he did work experience and learnt about the power of communication. Stuart loves literature and reading. He has been a volunteer in the Norman Lindsay Festival of Children’s Literature since 2006 and has tutored young students in English and public speaking.

In 2008 he received the prestigious NSW Minister’s Award for Excellence in Student Achievement for his involvement in these activities. Stuart is a very passionate and motivated person.

His personal philosophy on life is that negotiation is never a waste of time because the alternative is far worse. Empathy is one of the most important and valuable traits in a person. He applies this to everything he does. To be able to listen and understand is a skill that all good leaders value. He believes that negotiation should never be overlooked as a means of producing a solution.