Degree: Bachelor of Arts / Laws
Institution: Australian National University
In Residence: Burgmann College
Career Goal: A career in the Public Service as a UN Diplomat or a role in Australian politics 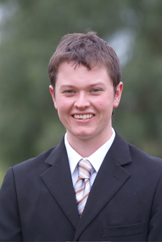 Samuel Stapleton is a young man of the finest quality. He has been a role model for his peers and applied himself to his academic and extra-curricular commitments at Dubbo College in rural NSW with diligence and excellence.

Samuel Stapleton has earned a well-deserved reputation as a reliable, dependable and outstanding young Australian. Samuel was educated in the NSW public education system and graduated as College Vice-Captain from Dubbo College in 2007 with a UAI of 97.65.

He’s a third generation member of the Dubbo community. His parents and grand parents taught him to be passionate about his local and Australian community. This instilled in him a great desire to help and serve his community and country. The values he believes in are empathy, resourcefulness, kindness, a strong work ethic, pride, fairness, and humility.

In 2006 he was elected to the Dubbo College Senior Campus Student Representative Council, which involved organising student run assemblies, swimming and athletics carnival activities and charity days including Shave for a Cure, Jeans for Genes Day and Beyond Blue Day.

In 2006 he was elected a House Captain, attended the Young Leaders Convention in Sydney and undertook work experience with the Department of Public Prosecutions.

In 2007, his role as College Vice-captain, provided him with the opportunity to take a greater leadership role within the school and Dubbo community. He also attended the Impact Student Leadership Conference in Bathurst, participated in Clean up Australia Day, Plant a Tree Day and fundraising for charitable organisations including Stuart House and the Smith Family.

He has represented the College in successful cricket and lawn bowls teams. The cricket team was runner up in the NSW CHS Davidson Shield.

Through studying Arts/Law he intends to gain a greater understanding of how the legal system functions and the values and ideals which it aims to protect in a democracy.

Samuel believes the law is the foundation of a just and fair society in which all people are equal. The law is the centre of a democracy that upholds inalienable rights and freedoms while enforcing responsibilities for all its citizens through legal institutions and concepts such as a constitution, representative government, the separation of powers, the doctrine of natural justice and the rule of law.

Because of what he has achieved and the promise of what he will do in the future, Samuel Stapleton is a deserving recipient of a C.A.S. Hawker Scholarship.