Hawker Scholar: 1995 - 1998
Degree: Graduate of a Bachelor of Arts majoring in Social Anthropology and a Bachelor of Law
Institution: University of Adelaide.
Residence: St Marks College from 1995 - 1997 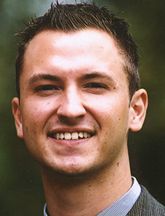 Robert Kavanagh graduated from Blackfriars Priory School in 1994. He was Dux of the School and his year 12 results placed him in the top 5% of students in South Australia and Northern Territory in that year.

He was awarded no less than five prizes at his school’s final Academic Assembly for academic and extra-curricular excellence.
Whilst at the University of Adelaide Robert won an Alumni Prize for academic and extra-curricular excellence. He also won two Australia Day Young Citizen Awards in 1997 and 1999 for his various successes and community service.

As well as working as a lawyer, Robert is an accomplished musician. He has played the trumpet since he was eight years old, and since then has won over 50 solo performance titles. In 2002 he won the South Australian Brass Champion of Champions title which earned him a berth in the international ‘Ern Keller Brass Soloist of the Year’ contest in February 2003.

He has performed professionally in Adelaide, Melbourne and Sydney and was a casual trumpeter with the Adelaide Symphony Orchestra between 1999 and 2002. He has also performed with the English National Ballet Orchestra and was Principal Trumpet in the Sydney and Adelaide seasons of ‘The Merry Widow’ in 1999. Currently he is a member of Kensington & Norwood Brass.

Robert is a barrister and solicitor of the Supreme Court of South Australia and the High Court of Australia. He specialises in tax and revenue law at Finlaysons Lawyers. In 2001 he was awarded Fellowship status by the Taxation Institute of Australia and in 2003 was invited to join the Law Council of Australia Business Section Taxation Committee.

Robert is also a teacher in tax law at the University of Adelaide Law School and has written and presented papers for several professional bodies. He has also been accepted by the University of New South Wales to begin his Masters degree, majoring in tax law.

As well as the above, Robert is also a member of the Law Society of SA Human Rights Committee and Amnesty International. He has written several papers and lobbied at Federal and State level for changes in laws which breach human rights and equality.

At the time of writing this biography, a human rights article written by Robert was being considered for the Law Society of SA ‘Bulletin Article of the Year’.