Hawker Scholar: 2007 – 2010
Degree: Bachelor of Economics Bachelor of Laws
Institution: ANU
In Residence: Burgmann College
Career Goal: A position in politics or the public service, possibly in the Department of Foreign Affairs. 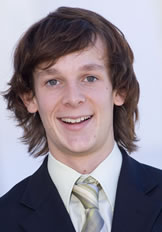 Mr Nicholas Vreugdenhil graduated from Scotch Oakburn College in Launceston in 2006 with a UER of 99.85. He is an impressive young man who has and will continue to make a difference. Nicholas is Tasmania’s first CAS Hawker Scholar.

Nicholas has strived throughout his school life to seek out opportunities and challenges. He has always been deeply involved with his College and local community. He was a House Captain, a member of the Student Executive and Captain of Debating.

Through these leadership positions, he learnt the importance of having a vision, of compromise between competing ideas and the impact that an older role model can have on younger students.

Nicholas contributed to his local community by organising a trivia night which raised over $2000 for a much needed play-area for the Children’s Ward at the Launceston General Hospital.

He was involved in the Tournament of Minds and Debating competitions at a national level. He understands the benefits of teamwork, the importance of respect for others’ ideas and values, and how to express his own beliefs articulately.

Nicholas has participated in a number of youth organisations. These include the Tasmanian Youth Parliament and the United Nations Youth Association (UNYA). He was elected Youth Premier which enabled him to have a lot of hands-on experience with the workings of parliament and the media. It also empowered him, along with other young people from around the State, to have their voices heard about youth issues.

He’s participated in a number of State and National UNYA Conferences and was selected as part of the Australian delegation to the international United Nations conference held in The Hague in January.

This conference is seen within the United Nations as a barometer of youth opinion around the world and its outcomes are passed directly on to the UN Secretary-General. He has also been an active member of the Amnesty International group at Scotch Oakburn College.

Australia’s last surviving Gallipoli ANZAC Alec Campbell is a former student at Scotch Oakburn College. His life story has helped shape Nicholas’s life to this point in time. Alec’s story is an integral part of the school’s history and like Charles Hawker, he was motivated by a compassion for others and a spirit of cooperation.

The introduction of Alec’s story at a young age and his parents’ strong sense of empathy for those in need have instilled the values of social justice, public service and a blend of pragmatism and idealism in Nicholas. These factors have shaped who he is and helped him find his life’s direction.

The rule of law underpins Australian society and enshrines its values. Nicholas believes that an understanding of what the law is and how it functions is crucial to making a difference to the world.

Nicholas is a young man of the highest integrity. He was awarded the Caltex Award for his College’s Best All Rounder in 2006. He has a positive outlook on life. He argues his case succinctly, is compassionate and sensitive but is prepared to defend the standards and principles he holds firmly - all attributes no doubt applauded by Charles Hawker.

Nicholas is a remarkably talented and committed young Australian.