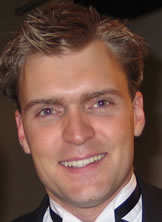 Nicholas's life journey is remarkable, his achievements outstanding and his potential unlimited. He admits his journey has been directed by an uncanny sequence of doors that have opened and closed; by a unique blend of individuals who have crossed his path; and by self-determination.

He hasn't chosen an easy or popular path. He considers himself fortunate to have had people to guide, motivate, inspire and challenge his decision-making; teachers, sports coaches, employers, pastors, family, friends and even adversaries. In all these people he's found qualities of wisdom, humility, compassion, knowledge, integrity, self-discipline and conviction that he would be proud to emulate.

However the greatest of mentors have been his parents. Nicholas believes he has benefited from their generosity of spirit in sharing part of their lives with him, enriching his and shaping his character in the process.

He's a trumpet and keyboard player, plays and coaches rugby and rowing at the highest level, culminating in him being appointed rowing coach for the Queensland Men's Youth Team and the University of Queensland Boat Club. He is currently the Head Coach, Cambridge University Lightweight Rowing Club.

Positions Nicholas has held include - Founder and Musical Director of the Queensland Medical Orchestra, Conductor of the Sunshine Coast Orchestra, Resident Medical Officer Representative to the Postgraduate Medical Council of Queensland, Resident Medical Officer Representative to the Medical Board of Queensland, board member of the UQ Health Sciences Faculty Board, federal councillor with the Australian Medical Association and national president of the Australian Medical Students' Association.

He's worked in New Guinea, been a journalist with the Sunday Mail and the Courier Mail Sports Department and found time to take on the role of tutor in the Anatomy Department at the University of Queensland. When time permits, he plays his trumpet on street corners with the Salvation Army.

He is reading for a Master of Philosophy (M. Phil) in International Relations at Cambridge, researching the role of politics and government in the HIV/AIDS epidemic engulfing many parts of the world.

His is a remarkable journey and we'll all be hearing a lot more about Dr Nicholas Ian Brown in the future.

He is a deserved winner of a CAS Hawker Scholarship.