Hawker Scholar: 2005 – 2007
Degree: Bachelor of Arts/Law
Institution: Australian National University & in residence at Burgmann College
Career goal: To be a solicitor with a social conscience and a politician representing the oppressed in our community, including aboriginal Australia. 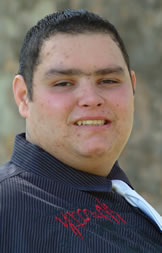 Michael Galluzzo has lived all of his life in Narrandera in the Riverina district of NSW. His mother is Aboriginal and his father Italian. He considers himself a proud Australian of both Aboriginal and Italian descent.

Michael’s community work with numerous organisations has been outstanding and has been recognised with many awards and citations. These include the Commission for Young People, NAIDOC Week School Achievers Award and the Australia Day Young Citizen of the Year Award for the Narrandera Shire Council.

He completed his HSC at Narrandera State High School in 2004. He was elected to numerous positions during his time at school including President of the SRC, School Prefect and Secretary of the Aboriginal Student Support and Parents Association. He was a key member of the school’s state semi-final debating team. In year ten, Michael organised a Bali bombing appeal. In year twelve, he was responsible for the ‘Run for Life’ fund raiser that raised $4,500 for the Cancer Patients Assistance Society.

In the Narrandera community, Michael organised and chaired a youth forum, has been guest speaker at Rotary, Lions and Soroptomist Clubs, organised the Narrandera ‘Beaut Ute’ competition and aided in establishing a community recycling depot.

On the state, national and international stage, Michael has been actively involved with the NSW Student SRC, NSW ReconciliACTION steering committee, NSW Youth Alcohol Forum and delegate to the Education Department’s Better Futures round table. In 2004, he was the sole Australian and youngest representative at the Oxfam International Youth Parliament.

Michael is an outstanding young Australian. He’s an all-rounder with a social conscience, commitment and vision. By studying International Law at ANU, Michael hopes to make a difference for those less fortunate than himself, who are battling human rights issues across the globe.

Michael is a deserved winner of a Hawker Scholarship.