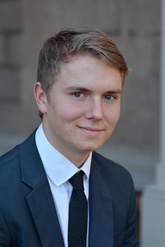 Mark McAnulty was born in Swan Hill in Victoria and moved with his family to Katherine, N.T., when he was six. Despite moving to a small farm near Sale in Victoria when he was 12 years old, Mark still considers himself a Territorian.

Attending a corroboree in the Walpiri community in the North Tanami Desert, changed his life. It was in the desert that he saw a small solar thermal system of six dishes that followed the sun to power the remote community.

The community installed the system because they were tired of paying increasing diesel bills for their loud diesel generator. They now have free electricity from the sun. This inspired him. As he has learnt more about climate change and the changes to the planets eco systems, he knew he wanted to help find ways for people to live sustainably.

This idea directed him through his high school years at Gippsland Grammar School. Mark wants to be involved in the transformation of Australia’s energy generation from fossil fuels to clean renewable sources.

At Gippsland Grammar, Mark was a committed and hardworking student who gained excellent results across a range of studies, was elected a Prefect and School Captain in 2013 and achieved an ATAR of 97.8.

He was selected by a local Rotary Club to attend the National Youth Science Forum in Perth in 2013. In addition to his studies, Mark was an active participant in the School community. In line with his commitment to the environment, he establishment a student led Green Team which focussed their attention on changing the sustainable use of resources within the School.

Mark represented the School in tennis and soccer and always demonstrated great sportsmanship. He was an active participant in the music program. He performed in musicals, three choirs, senior concert band and the clarinet ensemble, performing at concerts and assemblies.

He was awarded Full School Colours in Music in 2013, an indication of his excellent performances and his commitment beyond participation in leading and promoting music within the community. He was also an active contributor in the Drama program. He performed in School plays and in 2013, he wrote and directed his House play for the School Drama Festival. He was awarded Full School Colours in Drama in 2013.

Mark was involved in an alternative “schoolies” tour to Rwanda in December 2013. He taught maths to Rwandese children and volunteered at a rehabilitation centre, in addition to actively engaging with the community.

At Burgmann he ran first first marathon raising $250 for charity and hopes to make an IB team in 2015. He plays soccer, is an Essendon supporter, he sings, plays the clarinet and has joined numerous Burgmann groups, including the choir, the band and has performed with “The Hypochondriacs”.

Mark is a member of the Burgmann Sustainability Action Group, a representative with the Burgmann Residents’ Association and a member of the Australian Youth Climate Coalition in Canberra. The success of US electric car company Tesla Motors and a recent record breaking solar car from UNSW, has inspired Mark to make plans to convert his farm paddock run about into a road worthy (solar) electric car.

He believes we are at a crucial stage in human societal development where difficult decisions need to be made if we are to live sustainably on this planet. Having the capacity and the opportunity to develop both the engineering and the business skills to make this happen is one he wants to grasp with both hands.

Mark is destined to make a significant difference. He is a fine young man with integrity and commitment and is a deserved winner of a C.A.S. Hawker Scholarship.