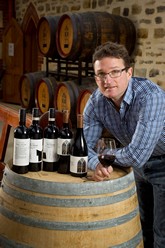 Written August 2012: I received the Hawker Scholarship in 1990, one of the two inaugural recipients. In preparation for my scholarship interview I read the biography of Charles Hawker by K L Needham, which highlighted the contribution he made to Australia and the importance of community involvement in national development.

I have built my career in the Australian wine industry through several positions at BRL Hardy P/L and Constellation Wines Australia, to my current role as CEO of McLaren Vale winery, Chapel Hill. The South Australian wine industry is a major contributor the state’s economy, culture and identity and its long-term prosperity necessitates that is recognized as such and invested in accordingly. As a strong advocate for the industry I sit on the executive of the South Australian Wine Industry Association and I am deputy chair of the McLaren Vale Grape Wine & Tourism Association.

Another quality of South Australia is its commitment to the arts. Since its establishment it has nurtured myriad institutions, festivals and artists. As deputy chair of the Art Gallery of South Australia’s Contemporary Collectors and board member of the Fleurieu Art Prize, I contribute to the state’s art legacy and the on going evolution of its creative culture.

Bedford Industries is a South Australian organization which changes lives, catering for the handicapped and less fortunate members of society. As a member of the Bedford Foundation I fulfill an ambassadorial role for the business, ensuring that its significant contribution to the state is widely known, and able to be on going.