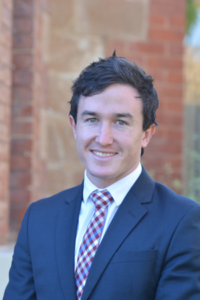 MacKinlay Cookson is committed to Australian agriculture. He grew up on a small family property at Borambola in NSW. The Cookson family specialise in producing commercial domestic and international grass seeds and beef cattle.

MacKinlay spent time at the Trinity Anglican College at Albury and then as is the case with many country students, he went to a boarding school in the city. At Melbourne Grammar he got a taste of city life and some international experience with college educational trips to Vietnam and Papua New Guinea. He graduated in 2013 with an ATAR of 95.3.

He took a gap year in 2014 and went home to work of the farm. He learnt new skills about being adaptive and resilient and handling ever-changing demands posed by nature, the economy and business relationships. His improved skill set included decision making, planning and completing manual tasks.

After a year on the farm he decided to give engineering/commerce a go at university. The property wasn’t big enough to support MacKinlay and his three siblings. Engineering and commerce appeared to offer financial stability and opportunity. What they didn’t offer however was sufficient stimulation. MacKinlay came to the realisation that his passion was for agriculture and after completing the year at Monash University he enrolled in the Bachelor of Business (Agriculture) at Marcus Oldham College.

MacKinlay has a vision for Australian agriculture. He wants to be involved in its growth and development and in particular with young, motivated agriculturalists. This he believes could be done through the development of avenues for motivated, educated, young people to build equity within corporate agriculture.

Ageing farmers could be encouraged to allow young investors to play more active roles in the succession of rural holdings. Relationship networks between outside equity partners, including superannuation companies and private equity investors, could be improved to facilitate Australian farming operations, leading to targeted, rapid growth in the industry. Government guarantees and secure insurance policies could also be used to instill confidence in young investors, to allow better risk management.

The integration of corporate agriculture into local communities is also a way in which young people could be supported in the industry without significant financial burden.

With the high cost of agricultural enterprises, it’s extremely difficult for young people to buy into the industry. Programs need to provide accessible and affordable pathways for young Australians. Ethical Investment Companies could be encouraged to allocate a percentage of annual profits to sponsor young farmers into land ownership.

Ultimately his goal is to use his personal and professional skills to facilitate pathways for the younger generations of agricultural enthusiasts into agriculture. MacKinlay believes there is a need for strong leadership, open communication, networking and mentoring as well as the use of technology as a major form of communication. He believes that opportunities abound in agriculture. It is a matter of opening up these opportunities and providing strong support.

He sees opportunities to work within corporate and government bodies to develop and facilitate programs supporting young, motivated farmers to get a foothold in the business of agriculture.

MacKinlay Cookson is a remarkable, talented and thoroughly genuine young man who is destined to make a significant contribution to Australian agriculture.