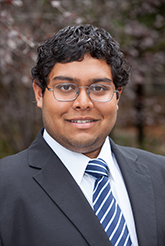 Born in New Delhi, educated around Australia and finally boarding for the final two years of his secondary education at Geelong Grammar School, Mr Kedar Abhyankar is a charismatic, confident young man who has the courage of his convictions.

His early educational years were spent studying several levels ahead of his year class. In grade seven he completed Mathematics and English for 10th grade. He entering various national essay competitions, completed higher/national examinations, engaged in Interschool debating and attempting to teach himself but it became clear that academically he was growing very little.

Even though he still calls Darwin home, Kedar knew he needed to attend a school and environment with more educational prospects. His father was initially against the idea as in his culture, children are expected to stay at home until they have a degree and are definitely not supposed to leave when they are fourteen. When Kedar applied for and was awarded a national academic scholarship to attend Geelong Grammar School, without the knowledge of his parents, Kedar’s secondary education was secured - with his parent’s blessing.

At Geelong Grammar he enjoyed the many opportunities that were offered. He revelled in the intellectual challenges of debating and public speaking the rigour of the classroom, where he discovered his passion for chemistry and the Philosophy club. He took on a number of leadership roles in the boarding house and as a School and House prefect. His IB ATAR was 97.5.

His science teachers supported his passion for chemistry. They encouraged his interest and allowed his small research 'experiments' in the lab outside of school hours. These experiences played a significant key role in his choice to study chemistry at university.

Chemistry to Kedar is many things: it embraces change with its central tenet that everything is in a continual state of transformation, it seeks to understand the subtle essence of matter and our world, and he believes it is the solution to many of our problems.

Chemistry is how we can feed the world through fertilisers, treat and cure disease through countless drugs, and create structurally sound materials to build everything from bridges to aircraft. Through developing agriculturally useful products and medicines it has improved the quality of life and reduced mortality.

Chemistry can provide solutions to many of today's issues including reducing climate change and our impact on the environment, developing cures for diseases such as cancer, HIV and drug-resistant infectious diseases, creating cigarettes that no longer kill and reducing our energy requirements.

In the future Kedar would like to be involved in using chemistry as an instrument for change through research and its practical applications as he feels it has tremendous potential to increase economic and social welfare in Australia and the larger global community.

His Head of Careers at Geelong suggests Kedar would agree that when it comes to sport, he is built for comfort not speed. He however made enthusiastic contributions to House swimming, soccer, badminton, athletics and cross country.

In the classroom he excels. He has an enquiring and curious mind. He taught himself the SAT Biology paper over a vacation period. He was an Australian representative at the World Scholar’s Cup in 2012 finishing top twenty in the team’s category and top four in the individual debating section.

Mr. Kedar Abhyankar is an intelligent, affable and engaging young scholar with a passion for learning. He is destined to make significant contributions to research in Chemistry on the world stage. He is an outstanding young Australian.