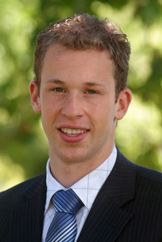 Jonathan Hamer is an intelligent, sensitive young man with an enthusiasm for learning. He is an outstanding all round student excelling in academic, sporting and extra curricula activities. Jonathan Hamer is a leader. He graduated from St Peter’s College in Adelaide in 2008 with a TER of 98.5.

As a year 13 student in 2009 he was invited by the Headmaster and School Council to take on the position of School Captain of St Peter’s College, a role he served with distinction. His excellent rapport with both his peers and staff coupled with his excellent communication skills ensured he was able to fulfill his obligations in a calm and considered way. He was born at Ararat in Victoria. His father was a rural GP. He has spent time in America and has traveled throughout Europe and Australia. These experiences fostered an interest in the international community and its relations.

Jonathan’s formative schooling was at Immanuel Primary School and Immanuel College in Adelaide. During his primary school years he developed a love of sport, music and singing. He was part of St Peter’s Cathedral Choir. The Choir did several singing tours including one to Bungaree Station, the birthplace and final resting place of C.A.S. Hawker. The Choir slept in the shearer’s quarters and sang in St Michael’s church at Bungaree. In 2002 he took on the role of Head Chorister and he sang in two South Australian Opera productions, Parsifal (2002) and Dead Man Walking (2003). He played the role of youngest brother of Teddy Tahu Rhodes.

Some other music highlights were a tour of England and France in 2008, where they played in Westminster Cathedral on ANZAC Day and on the western front for Somme Day. He also participated in a workshop and concert with the Australian Chamber Orchestra. He worked in six College drama productions as well as getting involved in various house activities including a week volunteering at the Julia Farr Centre. Despite all of these activities and achievements, his biggest regret is that he didn’t have time to do more debating, mooting and playing rugby.

In 2004 he entered St Peter’s College with the support of a generous academic and music scholarship. The College provided him outstanding opportunities and he was able to develop many life interests.

Jonathan played College cricket and in 2007 was the U17 athletics champion runner up. His played football in the First XVIII for three years.

2008 was a stellar year for Jonathan at St Peter’s College. He was a Prefect, Da Costa House Captain and Music Captain. He won colours for football, orchestra, string orchestra, choir and drama. He was awarded The Schubert Scholarship for Leadership, Academic Ability and Service, the DM Fowler Football Cup for Outstanding Service and Ability, the JAT Mortlock Prize for English Studies, the PG Osborn Performing Arts Prize and the FJ & HV Thwaites Music Prize.

In addition to extracurricular activities, St Peter’s has always focused on academic excellence. He decided in year 10 that his passion was the humanities. He has always enjoyed history and reading but his understanding and appreciation of history and English grew in his senior years. He also has a keen interest in politics, especially foreign affairs.

As School Captain he felt he had an obligation to give back to the school and he believed the position provided him with a chance to serve others and have a positive influence on those around him. ‘To whom much has been given, much is expected’ (Luke 12:48) is a verse he constantly reminds himself of and believes is pertinent to St Peter’s College and to almost every Australian.

He was able to coordinate fundraising for the Victorian bush fire appeals and for Violet day. The position of School Captain also brought him into contact with an indigenous community from Point Pierce. This continues to hold a special interest for him, as the plight of Australia’s Aboriginals is a blight on this country’s record. He believes if we are to take clear moral leadership on the global stage, we must first get it right at home.

In terms of his intellectual promise and leadership potential, Jonathan has already demonstrated qualities and commitment that make him a worthy recipient of a C.A.S. Hawker Scholarship.