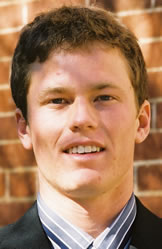 Jeffrey Duncan was educated at the Coomealla High School in the southwest corner of NSW and grew up on his family’s 25,000 hectare Glen Esk sheep station. Jeffrey’s daily bus trip to and from school throughout his secondary education, meant early starts and late finishes every school day. His UAI rank, at the completion of his NSW Higher School Certificate in 2004, was an impressive 99.35. He achieved the second highest score in agriculture in NSW in 2004.

Jeffrey is a country boy through and through. As a result of his work on the family property, he has come to understand and appreciate the extent to which regional and rural Australia can benefit from the work of engineers.

He believes they now understand the positive impact good design and construction can have on rural business and lifestyle. He is certain his Bachelor of Mechanical Engineering and Economics will allow him to make a major contribution in the future.

In 2004, Jeffrey was Dux and School Captain at the Coomealla State High School. He was one of 40 students in NSW to be awarded the Minister’s Award for Excellence in Student Achievement. This award recognised Jeffrey’s academic, sporting and cultural achievements as well as his leadership and contribution to the school community.

Jeffrey is an accomplished sports person and was selected to represent country Victoria in the under 21 state hockey side, touring Fiji in November in 2004.