Degrees: Bachelor of Advanced Computing (R&D)(Hons) & Bachelor of Politics, Philosophy and Economics
Institution: Australian National University
In Residence: Burgmann College
Career Goal: To make an impact in international relations and policy, complete a PhD at Cambridge, join DFAT and enter federal parliament. His dream is to be the second Tasmanian-born Prime Minister, after Joseph Lyons, under whom Charles Hawker was a minister.
Education History: St Augustine’s College, Cairns QLD 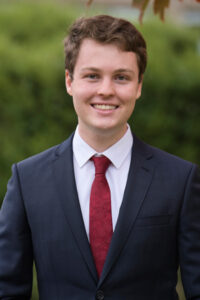 Harrison Oates is a straight A student. He is a well-motivated, sincere, and very generous young man. He is an articulate and self-assured person who enjoys the widespread respect of the staff and students at St Augustine's. Chosen as a Prefect in his senior year, he demonstrated qualities of leadership, mixing a spirit of service with an ability to enthuse and direct younger members of his college.

In his studies, Harrison has proved to be a gifted student. He has applied himself diligently to his various courses, achieving solid marks in all subjects. He excelled in Maths and Economics. Harrison also involved himself energetically in a whole spectrum of the extra-curricular life at St Augustine’s College.

He represented St Augustine's in sailing and debating, often captaining his team. Harrison was also Captain of the Student Representative Council. He was prominent in the organisation of the R U OK Day and the Relay for Life, raising much needed funds for these charities. To all his involvements, Harrison brought a welcome energy and good humour, as well as reliability and sound judgement.

Harrison is a most gifted and articulate public speaker. He was a regional finalist in the Lions Youth of the Year Competition in 2021. He spoke on the topic of Trust Deficit Disorder. He prosecuted his philosophy of always acting with authenticity, compassion, and integrity. He won the Laurie Blampied Trophy for Orator of the Year at St Augustine’s, for his dedication to public speaking during his high school years.

He was a national finalist in the H.V. Evatt United Nations Competition and was also named the Cairns Young Citizen of the Year for 2021 by the Cairns Regional Council.

In 2020 Harrison was award the CYC Junior Sailor of the Year, for his leadership, and capacity to teach and develop the next generation of Cairns Yacht Club junior sailors. His role as both an advocate and leader within the group of junior instructors was exemplary and assisted the Cairns Yacht Club’s junior sailing programs to grow into a vibrant and popular program in FNQ.

As an Australian Sailing qualified Dinghy Racing Instructor, he pioneered the use of the novel ‘stoplight’ bib system, which improved on-water safety. It is a first for Australia.

His ability to think and problem solve, guide, and teach others, combined with high levels of emotional intelligence and strong communication skills, will ensure a strong regional voice at ANU as a C.A.S. Hawker Scholar.

He was a strong role model for younger sailors and displayed great sportsmanship and commitment to the club and the Cairns community. He strives to make a difference in everything he does and has a strong commitment to building the capacity of others, ethics, and social inclusion.

Harrison is a most considerate and highly valued member of the FNQ community. He has gained the respect of his peers and many adults with whom he has come into contact. Whichever path he chooses in the future, Harrison Oates will make a significant contribution to society.