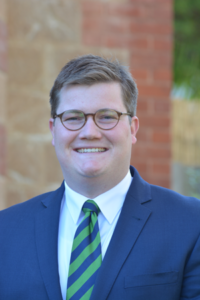 Daniel McKay describes himself as a passionate and ambitious young historian motivated by an intense curiosity and belief in the present value of understanding our past. Originally from rural NSW, he grew up on the family farm at Evans Plains near Bathurst. The world stretching beyond the paddocks seemed distant and unknowable. Yet, the more Daniel sat on the veranda devouring books, the more he realised that curiosity could be a passport to an understanding of that world.

Daniel McKay is an outstanding student. He completed his secondary education at The Scots School in Bathurst in 2009. After a year working at St. Paul’s School in London as an assistant teacher, he began studying at the ANU, residing at Burgmann College. In December 2016, Daniel graduated with Bachelor of Arts (History) and Bachelor of Laws, both with First Class Honours. His Law degree GPA was an excellent 6.0 and he earned the exceptional mark of 90 for his 16,000 word Honours thesis.

In 2015, on the basis of his History Honours research, he was awarded the Mick Williams Prize. A chapter of his thesis was further recognised in 2016 by the NSW History Council with their Max Kelly Medal for a beginning historian working in Australian History.

In 2014, his undergraduate research into political responses to drought won the History category of the international Undergraduate Awards and he received a gold medal at a ceremony in Dublin. This work was subsequently published in the sixth volume of the Undergraduate Research Journal. Previously, he interned with the Parliamentary Library and held Summer Research Scholar positions at the ANU and jointly at the University of Queensland and Queensland State Archives in Brisbane, working on historical projects.

In 2013, Daniel was awarded a Santander Scholarship and a Commonwealth grant to undertake a course at Cambridge University as part of the International Alliance of Research Universities’ Global Summer Program.

He also received the DAAD Encounter Europe Scholarship to attend an intensive course on the European Union at the European Academy in Germany.

There is much more to Daniel than his outstanding academic achievements. He currently volunteers on the council of the ACT Branch of the Royal Commonwealth Society, being co-opted to help drive generational change. He has also been a director of ANU Student Media and served as Deputy Editor-In-Chief of Woroni, the ANU student newspaper.

Previously, he volunteered on the board of the ANU Union, the academic board of the College of Arts and Social Sciences and was elected by his peers to the Burgmann College Council and Board of Management. During his time at Burgmann, Daniel served as Co-Chair of the Burgmann-Doomadgee Community Partnership, working to continue the association between the college and the remote indigenous community of Doomadgee.

Daniel is proud of his rural background. In 2012-13 he was founding President of the ANU Regional, Rural and Remote Students’ Society and has since served on the executive in various other positions up until the present. He also volunteered with the ANU Access and Inclusion office for several years as a Regional Ambassador, visiting high schools in NSW to speak about the opportunities of higher education.

Daniel is a gifted and award-winning community minded scholar. He is mature, responsible, conscientious and personable. He is at the beginning of what will no doubt be a brilliant career.

He finds great inspiration in the life of Charles Hawker, who answered a privileged education with a dedication to public life. Daniel McKay will make a significant contribution to this country and is a deserved winner of a C.A.S. Hawker Scholarship.