Hawker Scholar: 2003 – 2005
Degree: Bachelor of Engineering (Mechatronics) Bachelor of Arts (Politics)
Institution: University of Adelaide & in residence at St Mark’s College
Goal: to pursue a career that allows creative development of ideas in the use of Mechatronics into functional products for the betterment of human life and the environment. 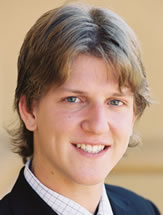 Christian Winterfield was educated at Trinity College in Gawler in South Australia studying Math’s 1 & 11, Physics, Chemistry and English. He completed his secondary studies in 2002 and achieved a merit (20/20) in physics and an overall Tertiary Entrance Rank of 99.35.

Christian was awarded the Trinity College David Strange Memorial Award for the most outstanding student at the College in 2002. His academic achievements have been recognized by a significant number of school-based, state and national Awards and prizes including repeated dux of several subjects and national Mathematics and Science prizes.
During his time at Trinity College, Christian demonstrated excellent leadership skills and held a number of senior student, house and team sport positions including House Captain and College Prefect.

Christian participated widely in the academic and cultural life of the College. He has a passion for music, playing various instruments including tenor horn, and now percussion for Barossa Junior Brass and has been awarded College Blues for music. Christian is currently a member of the Tanunda Town Band as principal drummer and is a member of local jazz ensemble ‘Five Little Men’. He also plays piano and has studied to sixth grade standard.

He was one of six students to represent Australia in April 2002 at the London International Youth Science Forum (LIYSF). This gave Christian the opportunity to share ideas and gain a wealth of knowledge by interacting with 299 other participants from around the world. The forum offered the participants the chance to visit world-class research facilities at Cambridge University and the Airbus Multi-National Company in the UK.

In what little spare time he has, Christian plays chess, listens to music, paints, is an active member of the St Mark’s Lutheran Church at Freeling and designed and constructed an award winning carbon dioxide powered dragster.

Christian is a remarkable young Australian. He is studying a Bachelor of Engineering (Mechatronics) and Bachelor of Arts (Politics) at the University of Adelaide and is in residence at St Mark’s College.