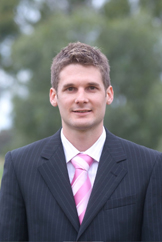 Chris Warrick is an inspirational and remarkable young Australian who faces and deals with challenges that would defeat most people. He completed his Certificate of Education at Horsham College in Victoria in 2003 and decided his future was in agriculture.

After reading Charles Hawker’s autobiography he was inspired to apply for the scholarship as he can relate to some of C.A.S. Hawker’s personal qualities and experiences.

Chris Warrick grew up on a modest family farm near Horsham in Victoria with his four siblings. When he’d completed his HSC, he applied to study at Marcus Oldham College. His intention was to travel, gain a broader knowledge of agriculture and get a sound education in the agricultural business sector.

During his pre-entry practical experience year, Chris sustained a serious back injury working on a neighbour’s farm, which has left him unable to do manual labour - potentially devastating for someone committed to working in agriculture.

After his injury, Chris spent much of his time and money on medical and recovery procedures which proved unsuccessful. In order to keep occupied and stimulated in life he stared a joint business with his father, manufacturing a grain silo level indicator. Given Chris’s physical limitations, the Wockaz Silo Levalert was born out of necessity, with Chris its first customer.

He has subsequently been awarded a Victorian Work Safe Award in 2005, and Wimmera Business and Wimmera 2020 Agribusiness Awards in 2006.

Since his back injury in 2004, Chris has been forced to change a lot about his lifestyle and learn to manage and overcome pain on a daily basis. After the initial disappointment, he believes the injury has given him more determination to make the most of life in general, and to take advantage of every opportunity. This Hawker Scholarship represents one of those opportunities.

Receiving support and assistance from friends and professionals, his passion to help others has been strengthened to the point where he is no longer satisfied with self-achievement but strives to share his achievements with others.

He has joined the local Wimmera Safety Group and makes a point of sharing his experience to increase awareness of workplace safety with young people on farms. He’s become re-involved in church life while living in Wagga, taking part in the organization of weekend activities for the young adults group.

Since 2007, Chris has been working with the Western Australian based Kondinin Group, researching and helping farmers to share information. He has been given the opportunity to travel across the country gathering and sharing information with farmers to improve agriculture and provide support for big and small farmers, many affected by drought.

Charles Hawker was a truly inspirational man who had a positive affect on so many people. Chris’s intention is to live a life which parallels the determination and spirit of C.A.S. Hawker.