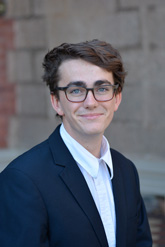 His mother is a New Zealander and his father’s family is from the UK. Both have had major influences on his life. He has been educated in the public school system in NSW. He is a big picture person. Cameron Allan is a confident young man who has the courage of his convictions and is mature beyond his years.

He considers himself a snowball. Through life’s planned and unexpected turns, successful and frustrated goals and hard-earned and accidental insights, he has been absorbing experiences and adding them to his character.

As he plummets along his hoped-for but yet-to-be realised track, he gains momentum. Yet at the very middle of the snowball are the principles that determine where he rolls.

His schooling inspired and nourished his appreciation for Australia and the education system it offers. Growing up in the shadow of his father’s sense of loss at not having a satisfactory education, Cameron has always viewed education as a privilege.

He understands the connection between education and income inequality.
He has concluded that education is important, education changes lives and that the best kind of education is one that values effort over status.

This principle has permeated his work ethic through his high school years. Through the rigour and discipline that education provides, he has moulded his character and skills for the better.

His HSC results are outstanding. His ATAR was 99.95. He was Dux of his final year at Merewether High in Newcastle. He was placed on the 2014 HSC All-Rounders Achievers list and achieved a state ranking in Legal Studies.

The vast difference between his lifestyle and a boy of his age in another country constantly prods his moral and social conscience. The differences have spurred Cameron to constantly advocate and work towards a community and a world, free from deprivation and inequality.

He is an optimistic person. He is working at the Oaktree Foundation as a Community Organiser in Canberra to build the Community Leaders Program and contribute to the End Poverty Campaign.

He has been appointed as a Youth Ambassador for the Global Volunteer Network and a PLAN Youth Ambassador, both of which involve applying his skills as a campaigner to derive local targeted action surrounding aid, development and poverty alleviation.

His interest in politics is underpinned by the issue of parochialism, whereby political bodies fixate on smaller sections of an issue rather than considering the broader context.

He believes there is a ‘take-no-prisoners’ approach to politics in Australia. This political approach, paired with the 24-hour media cycle, has created a barrier to legitimate policy debate. At ANU he intends to research possible solutions that promote transparency in government.

To balance his extensive academic engagement, Cameron is involved in a variety of hobbies. He has a raw love of the creative arts, he plays tennis, runs most mornings, plays piano, runs a blog on international affairs and stretches his understanding of the world through reading philosophy.

He’s been described as a person with unfettered energy and brimming with creativity. He is full of questions, loves to participate and has a real zest for learning. He is his open to diversity and has an eccentric sense of humour.

Cameron has a refreshing wide-eyed quality about his approach to creative arts and life in general. His enthusiasm and energy are matched with a discipline that is remarkable in someone his age.

Mr Cameron Allan is a one-off. He is an intelligent, affable and engaging young person with a passion for learning. He is destined to make a significant contribution on the world stage. He is an outstanding young Australian and a deserved winner of a C.A.S. Hawker Scholarship.