Hawker Scholar: 2007 – 2010
Degree: Bachelor of Commerce Bachelor of Laws
Institution: ANU
In Residence: Burgmann College
Career Goal: To pursue a career in either Australian or international politics in order to benefit both Australia and neighbouring developing countries, working for The Australian Department of Foreign Affairs and Trade, The World Bank, IMF or the United Nations 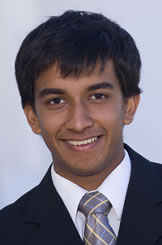 Ashoor Khan is from Moree in northern NSW and completed his secondary education in 2005 at The Armidale School with a UAI of 96.4.

Ashoor and his family migrated from Fiji in 1990. He completed his primary schooling at Moree Public School.

In his final year at TAS, he was appointed Deputy Senior Prefect, awarded the Gold Duke of Edinburgh award, an Order of Australia Association Certificate for Service to the Community and was the Regional Winner of the Freemasons Young Achiever of the Year competition.

He held positions within TAS including Chair of the Round Square Committee, Secretary of the Sports Council and was 2IC of the TAS Cadet Unit. He played in the 1st XI hockey team, 1st touch football team and held the position of Manager for the 1st XV rugby team. He excelled in public speaking and debating, receiving a Certificate in Voice and Communication Australia (C.V.C.A) from the Australian Music and Examinations Board (AMEB).

In his final year, Ashoor was also a representative of the Young People’s Reference Group, selected from across the state for the NSW Commission for Children and Young People.

His hobbies include watching and playing sports including cricket, golf, tennis and hockey. He enjoys spending time with family and friends and has a true passion for travelling. One of his personal goals is to travel to every continent and learn to speak a language from each one of them.

In 2006, Ashoor worked as a GAP-teacher at a school in Lima in Peru. He had to adjust to a new culture in a third-world country with no background in Spanish. It was an extremely challenging and often tough experience.

While in Peru, he travelled throughout the Peruvian Andes, the Amazon jungle and visited Macchu Picchu. He also travelled through South America from the desert coastline of Ecuador to impoverished Bolivia. He then spent two months travelling in both the United Kingdom and Europe where he was inspired by its rich history and culture.

His year abroad was a life-changing experience that taught him many valuable life lessons. It emphasised how privileged and lucky he is to live in Australia.

Living in Peru, Ashoor viewed first-hand issues of poverty, corruption and social inequality that resulted in a severe gap between the rich and poor.

Travelling enabled him to learn more about other people and cultures and also to know more about himself as an individual. As a result, he feels a real responsibility to serve the Australian community.

Ashoor is an outstanding young Australian, with high personal standards of behaviour and a good sense of values and social justice. He has initiative and a mind of his own and the ability to get things done. Ashoor Khan will make a difference.