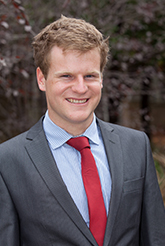 Andrew Nilon is an outstanding individual who has an enormous amount to give and often does so willingly. He is an intelligent, diligent, good natured and respectful person. He has a positive and easy-going personality. He is an all-rounder both academically and on the sporting field with a sense of humour and a social conscious.

He is only the second Tasmanian student to be offered a CAS Hawker Scholarship. He completed his secondary studies at Scotch Oakburn College in Launceston in 2012with an ATAR of 97.85.

Andrew achieved ‘possible’ scores in English Studies and Physical Science. He also achieved solid results in Modern World History, Legal Studies, Economics and Chemistry. He was acknowledged by the College with both Academic Colours and Academic Honours.

During his senior school years and his gap year in 2013, he was involved in community service via the Round Square organisation. He represented Scotch Oakbank at the Australasian Round Square conference in Sydney. He has also participated in numerous conferences and conventions with Round Square, World Vision and Scotch Oakburn.

His service activities include fundraising and building a relationship between Scotch Oakburn and a school in Maliana, Timor Leste. A visit to Maliana in 2011 where he lived, met, taught and learnt with young people in the village deepened Andrew’s passion for service and development work and partly informed his decision to study Law and Economics at ANU.

In 2013 he returned to Maliana and see how the funds raised by Scotch Oakburn had been used to provide reliable clean water for the school, which is hoped will improve the attendance rates of girls, who will no longer be discouraged by poor sanitary standards.

In 2012 Andrew was appointed by his peers and the staff as Co-Captain of the College and was awarded Colours in Community Service and the Lodge Scotch College Prize for All Round Effort.

On the sporting field, Andrew was offered various leadership opportunities. He captained both his senior football and cricket teams and the College cross country team. He was also involved in other school activities including leading Education Outdoors trips for younger students.

At the completion of his year twelve studies Andrew was awarded the Don Wing Prize for Leadership and Community Service and the Co-captain’s Award.

Mr Andrew Nilon is a young man who is mature beyond his years. He has a keen sense of social justice and has shown he is capable of making difficult leadership decisions and standing by them even if the is outcome is unpopular with his peers – a quality which no doubt would be greatly appreciated by C.A.S. Hawker.

Andrew Nilon is a fine young man with much to offer.