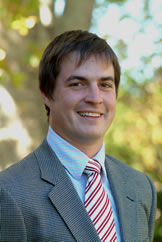 Alec Sutherland completed his secondary education at Rockhampton Grammar School in Queensland in 1998 and in 2004 commenced his Bachelor of Business / Agricultural Management at Marcus Oldham College in Victoria.

After completing his secondary schooling, he deferred his university studies for five years. Alec didn't return to his family's broad-acre grain and cattle property west of Emerald in Central Queensland. Instead he went to work in the central Queensland coal fields, finally working as a crane driver and rigger. He decided his future was back on the family property. Alec returned and they decided to expand the family property - just in time for the worst drought in 100 years.

After four years of poor rain, they were forced to contract and the properties were largely de-stocked. Alec decided his time would be better spent getting ready for future opportunities and enrolled at Marcus Oldham.

The experience has widened his horizons and provided a range of real life opportunities and experiences which he now wants to pass onto others in rural Australia.

Alec now wants to address issues of under utilization of resources, overgrazing and unsustainability within Australia's grazing system. His vision is to develop management systems which address these issues which will enable rural Australia to maintain profitability, improve biodiversity and sustain rural communities.

Alec has been elected to the position of Student President in 2006 and is completing the Marcus Oldham Rural Leadership Course during his final year of study.

Alec Sutherland is the future of rural Australia. He has the vision and capacity to influence fundamental change. Charles Hawker would strongly support Alec in his future endeavours. Alec Sutherland is a deserved winner of a Hawker Scholarship.