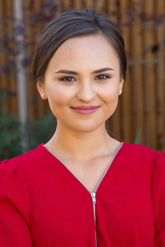 Shamsiya Mohammadi describes herself as ‘the daughter of a boat person’. Two years after she was born, her family of seven escaped the Taliban regime in Afghanistan and found refuge in the city of Quetta in Pakistan. They were minority Hazaras.

In desperation to find a safe corner of the world for his family, her father embarked on a rough and dangerous journey by boat. He arrived in Australia in 2000. In November 2006 her family was reunited in Renmark in the South Australia’s Riverland. Shamsiya was nine years old and she spoke no English.

What she has achieved since her arrival in Australia is simply outstanding and quite remarkable.

By any measure, Shamsiya is an outstanding student. She constantly received Academic Excellence awards. In her final year at Roma Mitchell College last year, she was recognized with the Year 12 Math Applications and Information Processing and Publishing awards, was Dux of the Girls’ Campus and achieved an ATAR of 99.75. She was further recognized with the Long Tan Teamwork and Leadership award.

During her time at Roma Mitchell Secondary College, Shamsiya was involved in a wide range of extra-curricular activities where she demonstrated high-level leadership skills and dedication to supporting her peers and other students. She participated in school rugby, volleyball, the Specialist Hockey Program and she plays for the Hazara Girls Football Club in Adelaide.

Throughout her years at high school, Shamsiya has been an active member of the Student Representative Council. In her final year, Shamsiya undertook the role of a House Captain, conscientiously and with great success.

Shamsiya’s commitment to all aspects of school life was demonstrated through her participation in the Debating Club, Key Club, Geography Club and National Mathematics Competitions. She provided leadership for regular events including Harmony Day celebrations where she represented the Afghan culture.

Shamsiya has selflessly served the community through numerous organisations outside the Roma Mitchell College. She held positions as an executive member of The Association of Australian Tertiary Students from Afghanistan (AATSA) and Welcome to Australia. This organisation seeks to build a bridge between the Australian community and refugees arriving in Australia.

The challenges faced by refugee women and girls are close to her heart.  Like Charles Hawker, who was a ‘passionately sincere advocate of the things in which he believed’, Shamsiya is a sincere and passionate advocate for the rights of women and refugees.

She has also served as a Senior Events Officer at Twelve25 Centre and recently earned a two-year position in the Salisbury Youth Council. In 2015 Shamsiya was the Youth Ambassador at the Australian Refugee Association (ARA) helping other refugees to settle in Australia and she is also a member of UniSA’s Powerhouse Radio Show to further her ambition of becoming a journalist. She regularly writes journals and she posts a blog.

Shamsiya Mohammadi is a one-off. She is an intelligent, affable and engaging young person with a passion for life. She loves Australia and she is destined to make a significant contribution on the world stage. She is an outstanding young Australian and a deserved winner of a C.A.S. Hawker Scholarship.