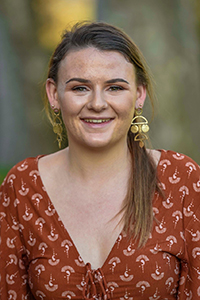 If Kaidy Morgan sets a goal and decides to do something, it happens. She is from a farm in a small community on Eyre Peninsula in South Australia. To complete her secondary education at St Joseph’s School at Port Lincoln, she took a 100-kilometre bus ride every school day.

Throughout her life she has taken every opportunity presented to her. She strives to achieve the best she can, with a strong sense of independence and determination. People, the land, animals and how they exist and interact has always been a passion. The move into agricultural science is a natural progression.

Academically Kaidy is an A grade student. Her ATAR or 93.35 is testament to her commitment to her studies. In addition to her DUX for her research project, she is a Year 12 A+ geography student. Throughout her secondary education, she has shown a great deal of independence and self-motivation. In addition to her straight A’s, she became a member of the Student Representative Council and participated in a short-term language exchange to Japan.

While completing a school assignment, she discovered an international program that focussed on environmental leadership. Her new goal was to become one of twelve students from across the world to be accepted in the Seeds of Change Sustainable Agriculture Program in Ecuador. She was accepted as the only Australian participant. She set out on her first solo trip overseas, making her own way from Adelaide to Quito. She was 16 years old. Her parents didn’t know she had applied for the programme.

On her return from Ecuador, Kaidy wrote an article about the importance of increasing biological activity in soils. It was published in multiple farming magazines and online. She was invited to present a lecture about adopting sustainable farming practices and soil health to local farmers.

In her role as female School Captain at St Joseph’s, Kaidy demonstrated strong proactive leadership skills through her organisation of refugee awareness and environmental protection activities within the school community. She has the ability to consider and show empathy for the opinions and circumstances of others.

Kaidy has been presented with a variety of community-based accolades including the Mayor’s Leadership Award. She was the inaugural recipient of the prestigious Order of Australia Association Student Citizenship Award for her volunteer work at respite camps as a mentor for disabled children, through the CARA organisation.

She has also been involved in Relay for Life, working with Fred’s Van to serve meals to less fortunate members of the Port Lincoln community and for being an environmental advocate.

Her Gap Year was spent at St Joseph’s working as a full-time Physical Education Trainee. This role allowed her to work with young children, particularly those affected by physical and intellectual disabilities to improve their fine motor skills and the way they approach life challenges.

Kaidy believes that through completing a degree in agricultural science, she will play a significant role in soil science and securing the future of agriculture in Australia.

Australian agriculture needs more young people like Kaidy Morgan. In many ways, the future of rural and regional Australia is in her hands. C.A.S. Hawker would be proud of her achievements and her commitment.