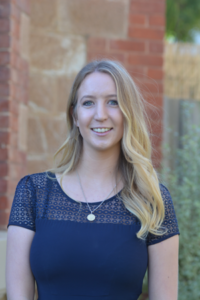 Miss Ella Graham is an outstanding student and remarkable young woman. She has achieved much in a very short time. She has always lived in regional Australia and has been educated at Booleroo Centre District School in the mid-north of South Australia.

Her passion for human rights and education lead her to join the volunteer organisation Latitude Global Volunteering. She wrote her application for the Hawker Scholarship while she was living in a rural village in Milawi in Africa. She had volunteered to teacher for four months during a gap year in 2016.

Ella is a very motivated student with an excellent work ethic. Her year 12 in 2015 was a tough year. Her family home was destroyed in the Bangor bush fires. This life-altering event impacted on her studies. Despite this trauma, Ella achieved her goal of getting accepted into law. She maintained her involvement in many public service activities and achieved an ATAR of 99.95 which ranked her in the top 26 students in South Australia. She was awarded four merits and the Governor of South Australia Commendation Award.

Ella exemplified the Booleroo Centre District School’s motto of ‘Strive to Excel’. In her final year, she also achieved the award of Student of the Year, the school’s highest honour for academic and personal success. This award is given to a student who ‘demonstrates outstanding academic and extra-curricular ability, cooperation and courtesy’.

Indigenous affairs have always interested Ella. Her experiences living in the Pitjantjatjara Lands as a child gave her a depth of understanding and interest in different cultures. She values and respects issues of equity and justice and is a passionate advocate for indigenous rights.

These interactions inspired the concept and development of a Food and Fibre garden at the Booleroo School. She also completed work experience at Ernabella Anangu School in 2013 as a teacher’s assistant.

Ella is an exceptional communicator and is motivated in sharing her knowledge and understanding with others. In addition to her confident interactions with school and community members, government agencies and local indigenous members, she has also given talks to members of the Natural Resources Management Board. These talks included an introduction and tour of the Food & Fibre garden developed at the school.

Ella was involved in the Youth Environment Council (SA) as a representative for the school and mid-north region. In 2012 she was an executive member and in 2013-14 acted as a mentor. As a mentor, Ella supported other students in developing their projects. Ella’s efforts saw her short-listed in the Channel 9 Young Achievers Award in 2012. She also won the Premier’s Natural Resources Management Award – Rising Star in 2013.

In 2015, Ella was one of forty winners of ABC Radio’s Heywire competition. She was invited to a weeklong Heywire Summit in Canberra. At this summit, Ella was successful in working collaboratively with other recipients to develop the concept of an educational app ‘Hands Up’ that will improve educational opportunities for rural communities. As part of the group, Ella was required to interact and present ideas to politicians, business leaders and invited guests. This idea has since been adopted by the Tasmanian Leaders Organisation.

Ella’s achievements have been made possible by her high level of commitment to setting and achieving her personal goals. She has demonstrated resilience despite at times enormous challenges. Ella is a deserved winner of a C.A.S. Hawker Scholarship.